delanceyplace.com 12/2/13 - the most famous man in the world

In today's selection -- in the mid-1920s, spurred on by $25,000 promised by an American businessman to the first who could achieve it, pilots from Europe and the United States vied to be the first to fly non-stop from the U.S. to Europe. It became known as the Great Atlantic Air Derby. Although a number of esteemed and well-financed pilots attempted the flight, the first to achieve it was a virtual unknown -- a lanky twenty-five year old Minnesotan named Charles Lindbergh. He crossed the Atlantic in a relatively unsophisticated plane for its day, fighting off sleep, urinating in a bucket, and manually navigating by making calculations from a map on his lap in an an enclosed-cockpit plane which lacked even a forward view, thanks to its enormous fuel tank between engine and intrepid pilot. When he landed outside Paris, instead of the sparse crowd he expected, he was thronged by tens of thousands and had instantly become the most famous and adulated person in the world: 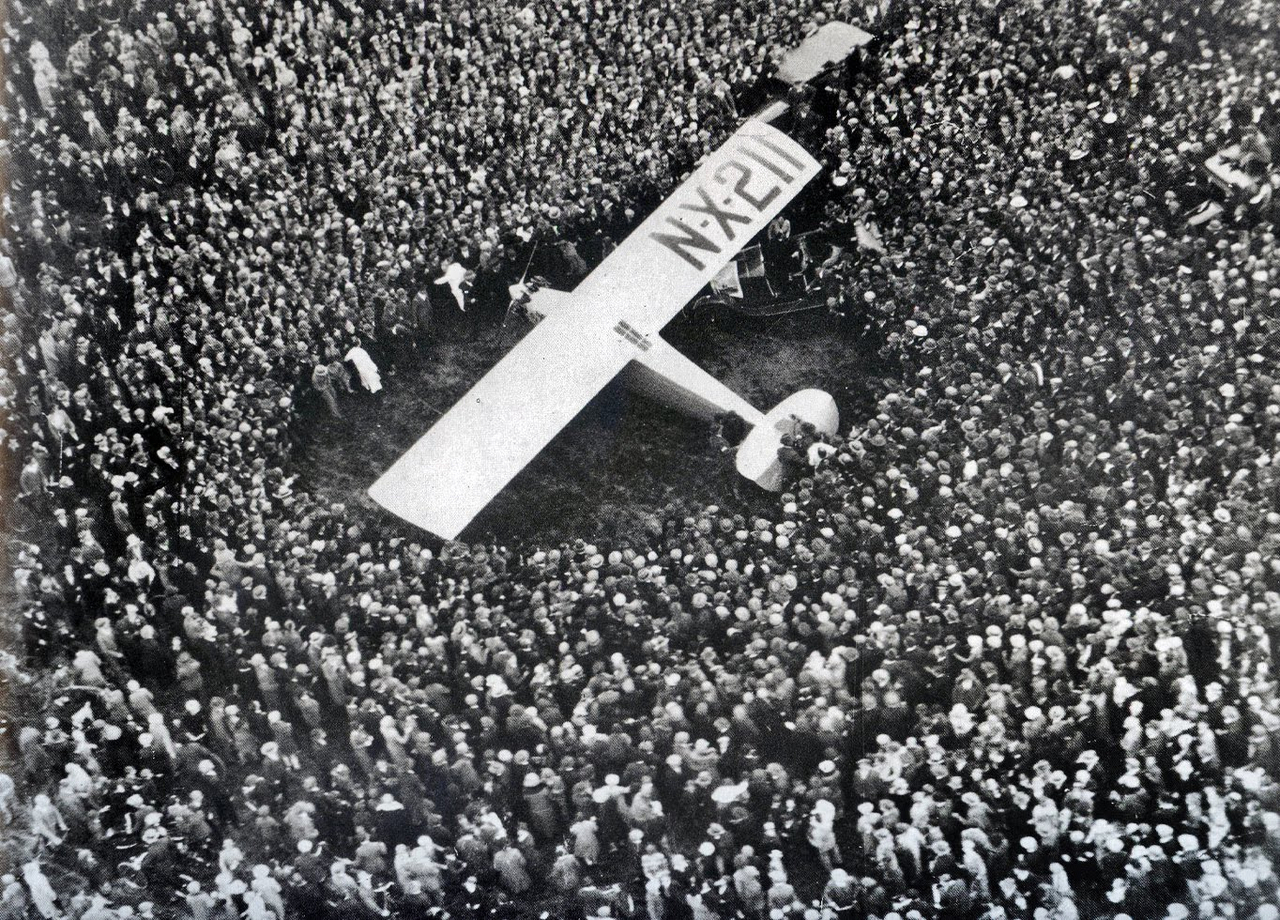 Aerial view of a huge crowd of people as they surround Charles A. Lindbergh and his plane upon his arrival at Croydon airfield, Croydon, England, May 29, 1927

"Ten days before he became so famous that crowds would form around any building that contained him and waiters would fight over a corncob left on his dinner plate, no one had heard of Charles Lindbergh. The New York Times had mentioned him once, in the context of the coming Atlantic flights. It had misspelled his name. ...

"At 10.22 p.m. Paris time [on May 21, 1927] -- precisely 33 hours, 30 minutes and 29.8 seconds after taking to the air, according to an official barograph that the National Aeronautic Association of America had bolted into the plane just before departure -- [Charles Lindbergh and his plane] the Spirit of St Louis touched down on the grassy spaciousness of [Paris's] Le Bourget. In that instant, a pulse of joy swept around the Earth. Within minutes the whole of America knew he was safe in Paris. Le Bourget was instantly a scene of exultant pandemonium as tens of thousands of people rushed across the airfield to Lindbergh's plane - 'a seething, howling mass of humanity . . . surging towards him from every direction of the compass', in the words of one onlooker. ...

"It was daytime in America. The news of Lindbergh's arrival was known all over within minutes. Horns sounded, sirens blared, church bells rang. From end to end the nation erupted in the kind of jubilant cacophony made when wars end. Newspapers struggled to find words adequate to Lindbergh's superlative achievement. The New York Evening World called it 'the greatest feat of a solitary man in the records of the human race'. ... In terms of rhetoric and emotion, this was a Second Coming.

"The New York Times gave Lindbergh's flight the whole of the first four pages of the paper even though there was little more to say than that he had made it. In the first four days after the flight American newspapers ran an estimated 250,000 stories, totalling 36 million words, on Lindbergh and his flight. Unsuspecting of just how much attention he would get, Lindbergh had subscribed to a newspaper-clipping service, with the articles to be sent to his mother, who discovered to her horror that a fleet of trucks was preparing to deliver several tons of newspaper articles by the end of the first week.

"A kind of mania swept the nation. Proposals were put forward to exempt Lindbergh for life from paying taxes, to name a star or planet after him, to install him in the cabinet as head for life of a new aviation department, and to make 21 May a permanent national holiday. He was given a lifetime pass to all major league baseball games everywhere. Minnesota for a time considered a proposal to rename itself Lindberghia.President Coolidge announced that 11 June would be Lindbergh Day in America -- the highest tribute ever paid to a private citizen by the nation. The Post Office rushed out special air­mail stamps -- the first time a living person had been so honoured. 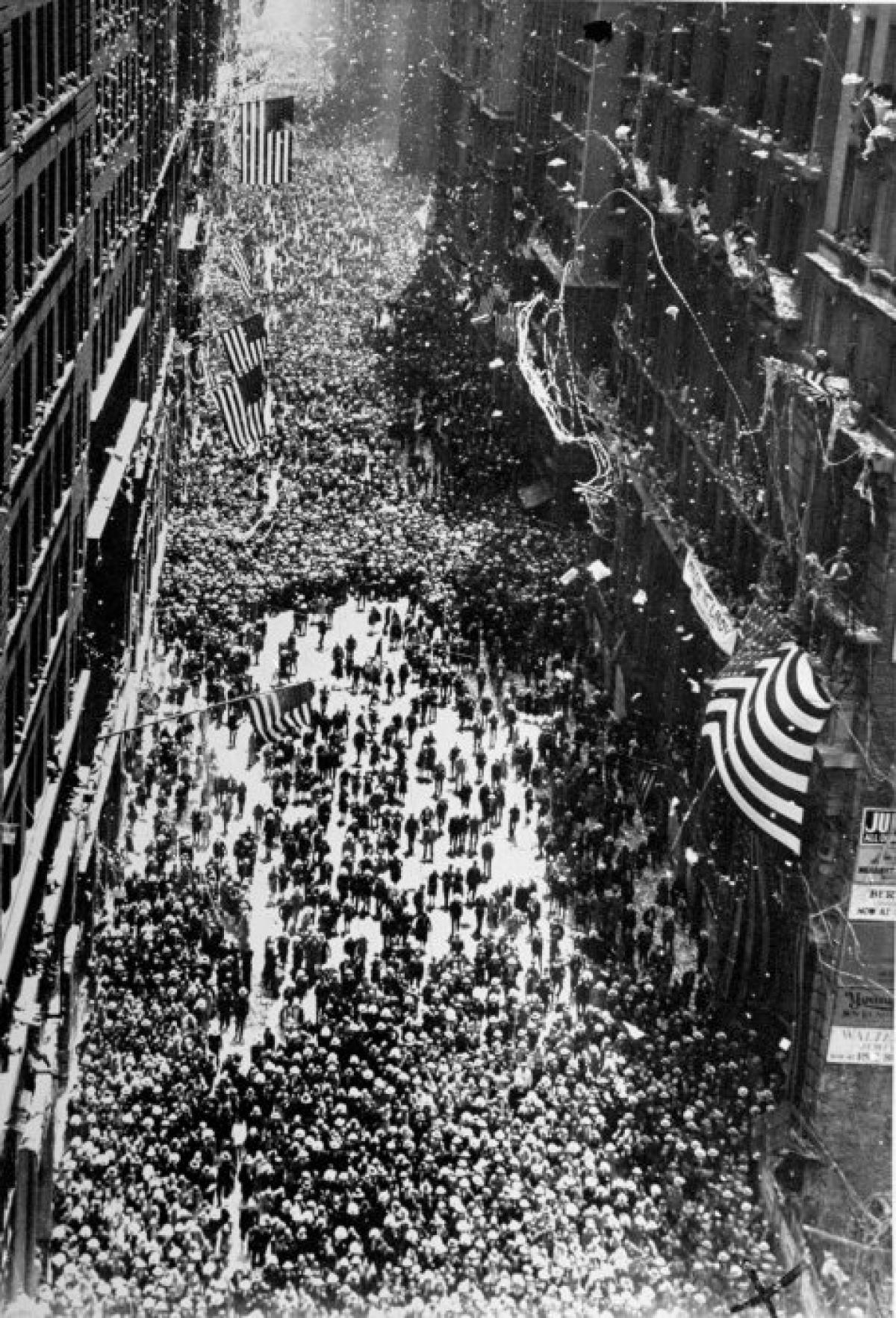 "Parks were named after him, children were named after him, streets and mountains, hospital wards and zoo animals, rivers and high schools and bridges - all were named after him. In Chicago, plans were announced to erect a 1,328-foot-high commemorative Lindbergh Beacon with a beam that could be seen three hundred miles away. More than 3.5 million letters were sent to Lindbergh -- primarily from females, it was noted -- along with 15,000 parcels containing gifts and mementoes. Many of his correspondents included return postage -- about $100,000 worth altogether, it was estimated -- in the patently deluded hope that he would find time to reply. Western Union received so many messages that it had to assign thirty-eight employees full time to manage them all. ...

"At least 250 popular songs were written for Lindbergh and his flight [and] the 'Lindbergh Hop' became a popular dance."