Continuing our Delanceyplace.com End of Year Encore Week: This year a full week on creativity.

In today's encore selection -- from The Genius in All of Us: New Insights into Genetics, Talent and IQ by David Shenk. Genius. The popular conception of genius is that it is an inborn gift, yet an increasingly large body of research suggests the opposite -- that genius is always the product of sustained effort. A case in point -- Mozart:

"Standing above all other giftedness legends, of course, [is] that of the mystifying boy genius Wolfgang Amadeus Mozart, alleged to be an instant master performer at age three and a brilliant composer at age five. His breathtaking musical gifts were said to have sprouted from nowhere, and his own father promoted him as the 'miracle which God let be born in Salzburg.'

"The reality about Mozart turns out to be far more interesting and far less mysterious. His early achievements -- while very impressive, to be sure -- actually make good sense considering his extraordinary upbringing. And his later undeniable genius turns out to be a wonderful advertisement for the power of process. Mozart was bathed in music from well before his birth, and his childhood was quite unlike any other. His father, Leopold Mozart, was an intensely ambitious Austrian musician, composer, and teacher who had gained wide acclaim with the publication of the instruction book ... Treatise on the Fundamental Principles of Violin Playing. For a while, Leopold had dreamed of being a great composer himself. But on becoming a father, he began to shift his ambitions away from his own unsatisfying career and onto his children -- perhaps, in part, because his career had already hit a ceiling: he was vice-kapellmeister (assistant music director); the top spot would be unavailable for the foreseeable future. 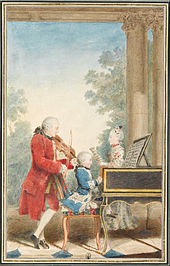 "Then came Wolfgang. Four and a half years younger than his sister, the tiny boy got everything Nannerl got -- only much earlier and even more intensively. Literally from his infancy, he was the classic younger sibling soaking up his big sister's singular passion. As soon as he was able, he sat beside her at the harpsichord and mimicked notes that she played. Wolfgang's first pings and plucks were just that. But with a fast-developing ear, deep curiosity and a tidal wave of family know-how, he was able to click into an accelerated process of development.

"As Wolfgang became fascinated with playing music, his father became fascinated with his toddler son's fascination -- and was soon instructing him with an intensity that far eclipsed his efforts with Nannerl. Not only did Leopold openly give preferred attention to Wolfgang over his daughter; he also made a career-altering decision to more or less shrug off his official duties in order to build an even more promising career for his son. This was not a quixotic adventure. Leopold's calculated decision made reasonable financial sense ... Wolfgang's youth made him a potentially lucrative attraction. ... From the age of three, then, Wolfgang had an entire family driving him to excel with a powerful blend of instruction, encouragement, and constant practice. He was expected to be the pride and financial engine of the family, and he did not disappoint. In his performances from London to Mannheim between the ages of six and eight, he drew good receipts and high praise from noble patrons. ...

"Still, like his sister, the young Mozart was never a truly great adult-level instrumentalist. He was highly advanced for his age, but not compared with skillful adult performers. The tiny Mozart dazzled royalty and was at the time unusual for his early abilities. But today many young children exposed to Suzuki and other rigorous musical programs play as well as the young Mozart did -- and some play even better. Inside the world of these intensive, child-centered programs, such achievements are now straightforwardly regarded by parents and teachers for what they are: the combined consequence of early exposure, exceptional instruction, constant practice, family nurturance, and a child's intense will to learn. Like a brilliant soufflé, all of these ingredients must be present in just the right quantity and mixed with just the right timing and flair. Almost anything can go wrong. The process is far from predictable and never in anyone's complete control."