In today's selection -- for Valentine's Day, from "Follow Your Heart: The Story of Layla and Majnun" by J.T. Coker:

"The story of Layla and Majnun is one of the most popular in the Islamic world, enduring in legends, tales, poems, songs, and epics from the Caucasus to Africa and from the Atlantic to the Indian Ocean. ... At the behest of the ... chieftain Shervanshah [in the twelfth century], Nizami collected many of the widely dispersed traditional versions and wove them into his great narrative poem.

"No one knows the number of translations of Nizami's work in the many languages encompassed by Islamic religious culture, but at least forty Persian and thirteen Turkish versions are known, and one scholar states that there are actually over a hundred versions in those two languages alone. An English translation appeared in 1836 which relied on an incomplete text with later additions by lesser poets (this text was used by Eric Clapton in the late 1970s for certain lyrics on his recording Layla and Other Love Songs). ...

"The story begins with the Sayyid, a man of wealth, power, and prestige, desiring a son and heir. He importunes Allah, who grants his request. The beauty of his son Qays "grew to perfection. As a ray of light penetrates the water, so the jewel of love shone through the veil of his body." At the age of ten, Qays goes to school and meets his kismet/fate, Layla. ... Love struck them both; others noticed, tongues wagged, and Qays first tastes bitterness. He refrains from seeing her, but his heart breaks and he begins to slip into melancholy. Layla's tribe, to protect her (and their) honor, deny her right to see him, and he falls into madness: 'A madman he became -- but at the same time a poet, the harp of his love and of his pain.'

"In time Majnun runs away into the wilderness, becoming unkempt, not knowing good from evil. His father takes him on pilgrimage to Mecca, to seek God's help in freeing him, but Majnun strikes the Kaaba and cries 'none of my days shall ever be free of this pain. Let me love, oh my God, love for love's sake, and make my love a hundred times as great as it was and is!' He continues to wander 'like a drunken lion," chanting poems of Layla's beauty and his love. Many come to hear him. Some write down the poems he spontaneously speaks.

"Meanwhile, Layla holds their love quietly so none will know. ...
Refusing suitors, she writes answers to his poems and casts them to the wind.

"Eventually Layla is married to another, but refuses conjugality. Being in love, her husband accepts her condition of an outward marriage only. Majnun learns of the marriage and of her faithfulness. Neither his father nor his mother, when near death, can induce him to return to his people. Wild animals, loving rather than fearing him, congregate in his presence, protecting him. One night Majnun prays to Allah, thanking Him for making him the pure soul he now is and asking God's grace. He sleeps, and in his dream a miraculous tree springs from the desert, from which a bird drops a magic jewel onto his head, like a diadem. 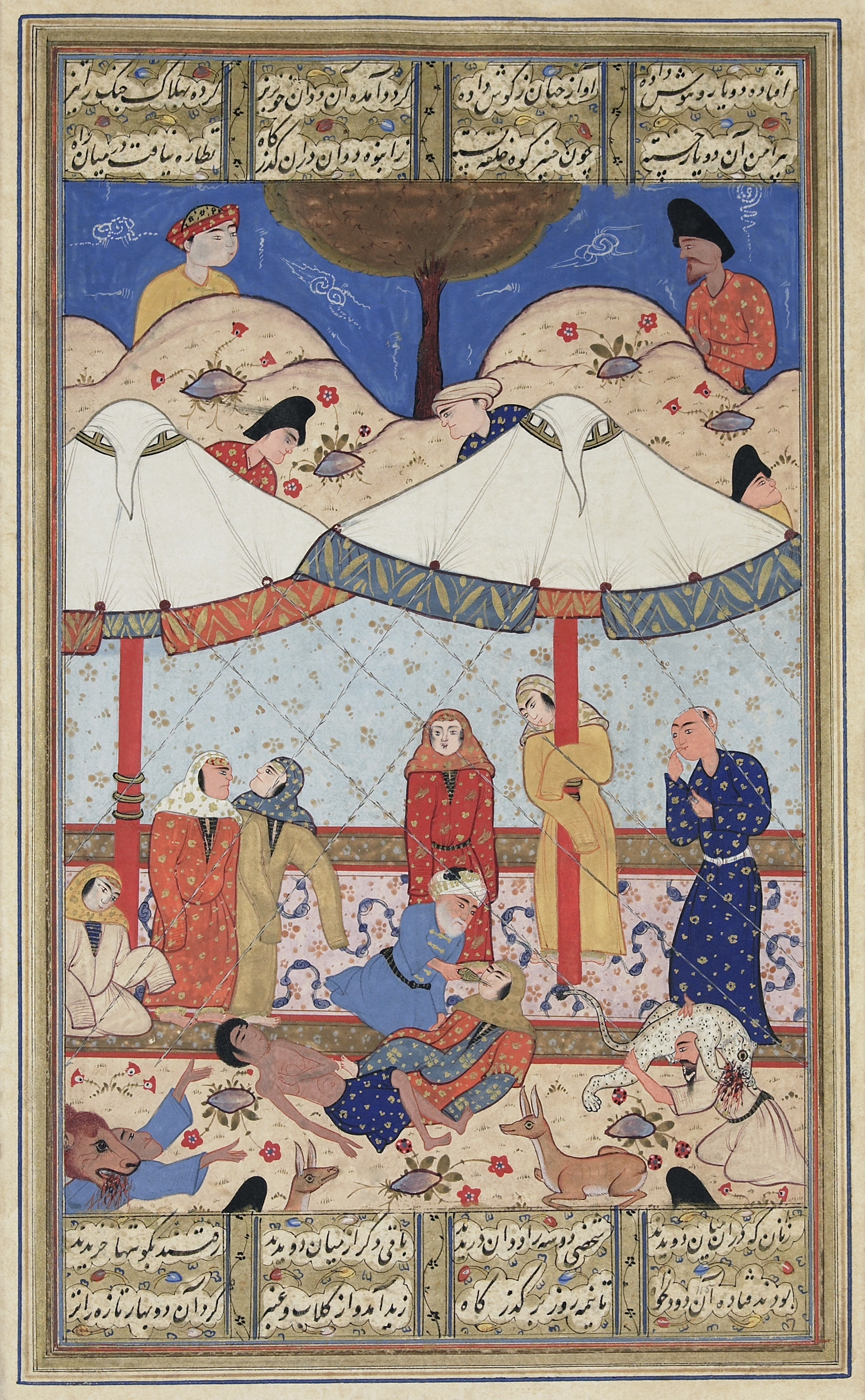 A miniature of Nizami's work. Layla and Majnun meet for the last time before their deaths.

"An old man, Zayd, helps Layla and Majnun to exchange letters and finally to meet, though she cannot approach him closer than ten paces. Majnun spontaneously recites love poetry to her, and at dawn they go their separate ways. ...

"After the death of Layla's husband, she openly mourns her love for Majnun, and dies shortly thereafter. Majnun hears of her death and, mad with grief, repeatedly visits her tomb. He dies and is buried beside his beloved.

"In a dream, Zayd, who tends their joint grave, has a vision of them in paradise, where an ancient soul tells him:

These two friends are one, eternal companions. He is Majnun, the king of the world in right action. And she is Layla, the moon among idols in compassion. In the world, like unpierced rubies they treasured their fidelity affectionately, but found no rest and could not attain their heart's desire. Here they suffer grief no more. So it will be until eternity. Whoever endures suffering and forebears in that world will be joyous and exalted in this world.

from Follow Your Heart: The Story of Layla and Majnun