In today's selection -- from Martin Van Buren by Ted Widmer. In the late 1830s, the body of George Washington was removed from the coffin where it had laid since his death in 1799 and was placed in a marble sarcophagus. That moment, that era, which was also the beginning of America's first great depression, represented a decisive shift away from the Revolutionary era to a newer, more industrial America:

"Something essential happened between 1837 and 1841. It was a hinge of history -- one of those moments when a door latch silently clicks open and the mood of a nation changes ineffably. ...

"Americans were caught vertiginously between the feeling that something was ending and something very new was beginning. The oldest of the revolutionaries were dying off -- James Madison in June 1836 (six days short of the fourth of July -- a pity), Aaron Burr in September of the same year, on the eve of seeing his protege elected. Sally Hemings had died a year earlier, though few noticed. In the late 1830s, the body of George Washington was removed from its coffin and placed in a marble sarcophagus, and this macabre newspaper account reveals how intensely dependent Americans still were on the revolutionary past that was slipping from their fingers: 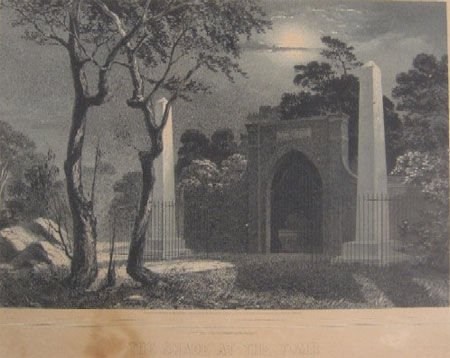 GENERAL WASHINGTON. -- The remains of this illustrious man, the Father and Saviour of his country, were recently placed in the sarcophagus made by Mr. Struthers of this city, from whom we learn that, when the vault and coffin were opened 'where they had lain him,' the sacred form of Washington was discovered in a wonderful state of preservation. The high pale brow wore a calm and serene expression; and the lips, pressed still together, had a grave and solemn smile, such as they doubtless wore when the first president gave up his mortal life for an immortal existence; 'When his soft breath, with pain, was yielded to the elements again.' The impressive aspect of the great departed overpowered the man whose lot it was to transfer the hallowed dust to its last tenement, and he was unable to conceal his emotions. ...

"But the times were startlingly modern as well. What wasn't invented in the 1830s? The railroad hurtled through American lives at sickening speeds up to thirty miles an hour, and tracks spread like spiderwebs across the landscape (the United States boasted 2,816 miles of tracks in 1840, up from 23 in 1830, and well ahead of Britain's 1,331 miles). The first daguerreotypes captured light and reality as no painter ever could (the earliest American example, from September 1839, showed a blurry church near Washington Square in New York). Samuel Morse, one of the first American photographers, was getting ready to unveil his new telegraph. Charles Goodyear stumbled across the formula for vulcanized rubber, perhaps winning World War II for the Allies by doing so. The Hoe type revolutionized the printed word, leading to the mass printing of newspapers and the creation of modern journalism. The list goes on and on. It was, in short, the birth of modernity. John D. Rockefeller, born in Richford, New York, on July 8, 1839, lived until 1937, within the lifetime of Elvis Presley.

"An extraordinary number of foreign travelers visited America in the 1830s, sensing that the future of the world was being enacted here. Tocqueville's books came out in 1835 and 1840; he was followed by scores of imitators from across Europe, but especially from England, now waking up to the brawn of its bastard stepchild. Americans, too, caught the fever. In 1837, Ralph Waldo Emerson stood up and announced that America no longer needed Europe; his speech was called America's declaration of literary independence. At nearly the same moment, young men across the land aggressively claimed their destinies. In Springfield, Illinois, Abraham Lincoln gave his first major speech, announcing that one generation had passed and it was time for a new generation to take charge. In Hudson, Ohio, John Brown experienced an epiphany and stood up in the back of a prayer meeting to announce that he was ready to destroy slavery by any means necessary. In Baltimore, a young slave named Frederick Bailey formed a secret debating club, the East Baltimore Mental Improvement Society, to debate the ethics of bondage with a circle of white friends -- a step toward his escape a year later and his reinvention as Frederick Douglass.

"As these young Americans found themselves, the nation swelled with the daily arrival of ever-growing numbers of immigrants, perhaps moved by the grand talk about freedom, but more likely just looking for a home. The 1840 census showed that Thomas Jefferson's simple agrarian republic now had almost 17 million people."