In today's selection -- from The American West by Robert V. Hine. Under what president did the U.S. have its greatest territorial expansion? James Polk -- through the annexation of Texas in 1845 (though most of the credit goes to John Tyler), the negotiation of the Oregon Treaty with Great Britain in 1846, and the Mexican-American War, which ended with the Mexican Cession of lands under the Treaty of Guadalupe-Hidalgo in 1848. These actions brought under American control a vast territory with the future states of Texas, California, Nevada, New Mexico, Arizona, Utah, Washington, and Oregon, as well as portions of what would later become Oklahoma, Colorado, Kansas, Wyoming, and Montana. Polk's short one-term presidency -- he ran on a promise to serve only one term -- therefore was among the most consequential in American history:

"Controversy ... surfaced over the question of admitting Texas to the Union in 1837. With abolitionists organizing to prevent the creation of another slave state, Presidents Andrew Jackson and Martin Van Buren decided to steer clear of annexation, believing that the preservation of the Democratic sectional coalition required keeping mum on slavery. The issue came up again during the term of President John Tyler, who assumed office after the sudden death of William Henry Harrison just a month into his term in 1841. Tyler negotiated a treaty of annexation with the Texans but failed to win the necessary two-thirds majority in the Senate.

"By the presidential campaign year of 1844 expansionists had become desperate to break the logjam. James K. Polk of Tennessee, candidate of the Democrats, ran on an explicitly expansionist platform calling for the 'reoccupation of Oregon and the reannexation of Texas at the earliest practicable period.' Here was another cynical contribution to the propaganda war. Linking Texas with Oregon, the phrase attempted to shift the focus from the expansion of slavery to expansion per se; employing the prefix ("reoccupation ... reannexation"), it implied that these territories had always been part of America's 'providential' domain. ... The Whigs [including Abraham Lincoln] were skeptical about expansion. ... What the country needed, argued the Whigs, was improvement, vigorous federal support for economic development. No, countered the Democrats, what the country needed was expansion, vigorous federal action to acquire more land, and with it more opportunity for the ordinary man and his rapidly multiplying offspring. ... 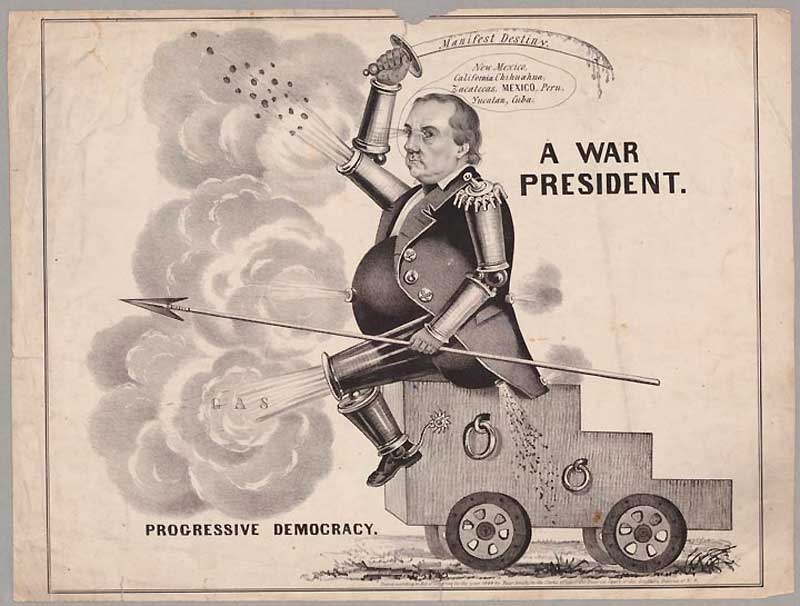 "After the election, lame-duck Tyler, with his eye on history, pressed Congress to admit Texas through the device of a joint resolution, which required only a simple majority. The Democrats pushed the measure through, presenting Polk with an accomplished fact when he assumed office in March 1845. The president promptly notified the Texans of the offer of admission, and by the end of the year the Lone Star had become one of twenty-eight on the flag of union.

"Flushed with success, the Democrats moved on to the Oregon question. In his first annual message to congress, Polk had announced his intention of seizing the Pacific Northwest from the British. What did it matter that the United States could offer no valid precedent for a claim to the northern land of 54° 40'? 'Away, away with all these cobweb tissues of rights of discovery, exploration, settlement, contiguity, etc.,' [journalist] John O'Sullivan asserted with typical bombast. 'The American claim is by the right of our manifest destiny to overspread and to possess the whole of the continent which Providence has given us for the development of the great experiment of liberty and federative self-government entrusted to us.' Polk similarly blustered in public, but in private he arranged an amicable treaty with the British, dividing Oregon at the forty-ninth parallel. The president wanted to concentrate on the greater prize he could obtain by confronting Mexico and did not feel that he could risk armed confrontations on both the southern and northern borders. The Senate ratified the international agreement with Great Britain in June 1846. By that time Polk desperately needed it, for he had already provoked a full-scale war with Mexico.

"For decades American filibusters had sought to subvert the northern provinces of Mexico, while American presidents simultaneously sought to purchase them. As far as the Mexicans were concerned, it amounted to gringo imperialism either way. After the Texas Revolution relations between the North American neighbors grew steadily worse. In 1843 Mexico's president, Antonio Lopez de Santa Anna, formally notified the American government that the annexation of Texas would be 'equivalent to a declaration of war.' As soon as the Mexicans heard of the congressional vote for annexation they severed diplomatic relations, and soon both nations had moved troops to the contested border region. ...

"The Mexicans were angry, but they were not about to invade the United States to reclaim a province they had lost ten years before. Polk, however, was spoiling for a fight. He announced to his cabinet that the acquisition of California --with the fine Pacific ports of San Diego and San Francisco -- was the prime goal of his presidency. To force the issue, in March 1846 he ordered General Zachary Taylor, veteran of campaigns against Tecumseh, Black Hawk, and the Seminoles, to march his 'Army of Observation' into the Nueces Strip [which Mexico viewed as part of its country in dispute with the U.S. which made the same claim]. The Mexicans warned Taylor to retire, but he refused, and on April 24 they crossed the Rio Grande, attacked a party of United States dragoons, and killed eleven Americans. Polk had his rationale for war. 'Mexico has passed the boundary of the United States,' he announced in his war message to Congress, 'has invaded our territory and shed American blood on the American soil.' In the lexicon of manifest destiny, desire took the form of declaration. Congress voted for war on May 13."