Today's encore selection -- from What the Dog Saw: And Other Adventures by Malcolm Gladwell. The 1950s to the 1970s, the number of American women coloring their hair rose from seven percent to more than forty percent:

"In 1956, when Shirley Polykoff was a junior copywriter at Foote, Cone & Belding, she was given the Clairol account. The product the company was launching was Miss Clairol, the first hair-color bath that made it possible to lighten, tint, condition, and shampoo at home, in a single step -- to take, say, Topaz (for a champagne blond) or Moon Gold (for a medium ash), apply it in a peroxide solution directly to the hair, and get results in twenty minutes. When the Clairol sales team demonstrated their new product at the International Beauty Show, in the old Statler Hotel, across from Madison Square Garden, thousands of assembled beauticians jammed the hall and watched, openmouthed, demonstration after demonstration. 'They were astonished,' recalls Bruce Gelb, who ran Clairol for years, along with his father, Lawrence, and his brother Richard. 'This was to the world of hair color what computers were to the world of adding machines. The sales guys had to bring buckets of water and do the rinsing off in front of everyone, because the hairdressers in the crowd were convinced we were doing something to the models behind the scenes.'

"Miss Clairol gave American women the ability, for the first time, to color their hair quickly and easily at home. But there was still the stigma -- the prospect of the disapproving mother-in-law. Shirley Polykoff knew immediately what she wanted to say, because if she believed that a woman had a right to be a blonde, she also believed that a woman ought to be able to exercise that right with discretion. 'Does she or doesn't she?' she wrote, [echoing her own mother-in-law's disdainful comment 'Fahrbt zi der huer? Oder fahrbt zi nisht?' and] translating from the Yiddish to the English. 'Only her hairdresser knows for sure.' Clairol bought thirteen ad pages in Life in the fall of 1956, and Miss Clairol took off like a bird. That was the beginning. For Nice 'n Easy, Clairol's breakthrough shampoo-in hair color, she wrote, 'The closer he gets, the better you look.' For Lady Clairol, the cream-and-bleach combination that brought silver and platinum shades to Middle America, she wrote, 'Is it true blondes have more fun?' and then, even more memorably, 'If I've only one life, let me live it as a blonde!' (In the summer of 1962, just before The Feminine Mystique was published, Betty Friedan was, in the words of her biographer, so 'bewitched' by that phrase that she bleached her hair.) Shirley Polykoff wrote the lines; Clairol perfected the product. And from the fifties to the seventies, when Polykoff gave up the account, the number of American women coloring their hair rose from 7 percent to more than 40 percent. 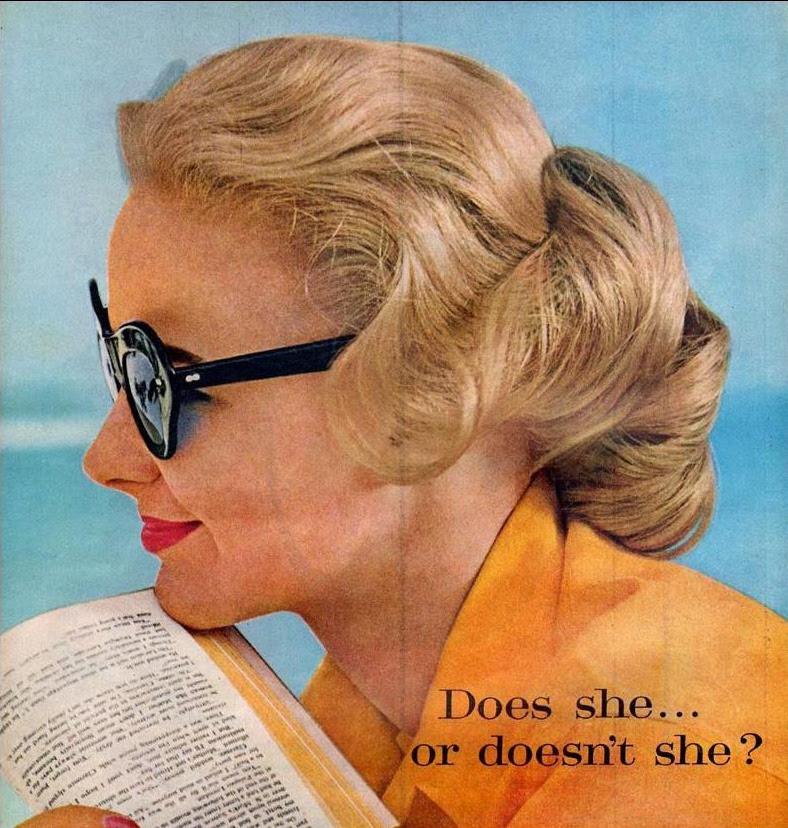 "Today, when women go from brown to blond to red to black and back again without blinking, we think of haircolor products the way we think of lipstick. On drugstore shelves there are bottles and bottles of hair-color products with names like Hydrience and Excellence and Preference and Natural Instincts and Loving Care and Nice 'n Easy, and so on, each in dozens of different shades. Feria, the new, youth-oriented brand from L'Oreal, comes in Chocolate Cherry and Champagne Cocktail -- colors that don't ask 'Does she or doesn't she?' but blithely assume 'Yes, she does.' Hair dye is now a billion-dollar-a-year commodity.

"Yet there was a time, not so long ago -- between, roughly speaking, the start of Eisenhower's administration and the end of Carter's -- when hair color meant something. Lines like 'Does she or doesn't she?' or the famous 1973 slogan for L'Oreal's Preference -- 'Because I'm worth it' -- were as instantly memorable as 'Winston tastes good like a cigarette should' or 'Things go better with Coke.' They lingered long after advertising usually does and entered the language; they somehow managed to take on meanings well outside their stated intention. Between the fifties and the seventies, women entered the workplace, fought for social emancipation, got the Pill, and changed what they did with their hair. To examine the hair-color campaigns of the period is to see, quite unexpectedly, all these things as bound up together, the profound with the seemingly trivial. ...

"When the 'Does she or doesn't she?' campaign first ran, in 1956, most advertisements that were aimed at women tended to be high glamour -- 'cherries in the snow, fire and ice,' as Bruce Gelb puts it. But Shirley Polykoff insisted that the models for the Miss Clairol campaign be more like the girl next door."