Today's selection -- from Tune In: The Beatles: All These Years by Mark Lewisohn. In Britain (as in America), as recently as the early 1950s, there was little if any fashion for teenagers -- only children's clothes and adult clothes. The Teddy Boys changed that, and with it linked the idea of teenage fashion with juvenile delinquency:

"As simplistic as it is to consider that fashion for young people didn't exist before the 1950s -- that children reached 18 and then dressed like their parents -- this was the essential truth of it. The suit-and-tie look was maintained daily in almost all walks of life by almost all men of all ages. [Fathers] sat in a shirt and tie, or something similarly smart, at home in the evenings and at weekends, and certainly when going out, and almost every man had very short hair that was brushed or combed neatly into a parting and greased.

"In London around 1948 there was a trend among upper-class Guards officers to wear handmade frock-coats with velvet collars and double-breasted waistcoats, echoing the style of royalty, politicians and businessmen in Edwardian (and previous) times. In the early 1950s, this style was taken up by gangs of working-class London youths, except they didn't ape the trend, they subverted it, extending the 'drape' jacket to the fingertips and knees in the manner of the American 'zoot suit.' In May 1952, an advert ran in the Daily Mirror for 'crepe soled shoes, in 18 different styles,' with a drawing of a young couple jiving to a jazz band and a blurb that exclaimed 'Not for him are the fashions of Grandfather's day.' These shoes, also known as 'brothel creepers,' went brilliantly with the Edwardian jackets, and the outfit was completed with tight-legged 'drainpipe' trousers (to be known in Liverpool as 'drainies'); 'Slim Jim' bootlace ties; tight waistcoats; luminescent socks; and, ever the crowning glory, a mop of hair swept back off the forehead into a piled quiff held in place with as much gunk as necessary. The hair at the back was separated and greased into two lanes, a style that took its name from what it looked like -- in Britain a 'duck's arse,' in America a 'duck's ass' or 'ducktail,' the 'DA' for short. (The American film actor Tony Curtis, very popular among British kids, was the chief influence: people called it 'the Tony Curtis style.') Finally, the 1950s Edwardian always carried a comb to keep his hair in order, and so much the better if it was steel and could double as a weapon. 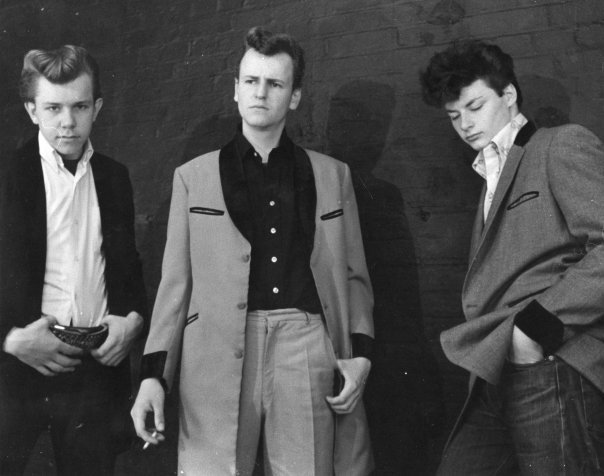 "Young Edwardians started to roam the streets in gangs rigorously demarcated into tight little districts or areas, and there were running battles with anyone who stepped in from outside. Juvenile delinquency was constantly in the news after the war but Edwardian activity was fairly low-key until January 1953, when an illiterate 19-year-old Londoner called Derek Bentley was found guilty of murdering an unarmed policeman, and was hanged for his crime. The subject was hot for a long time, and the popular press, noticing Bentley's appearance, began calling Edwardians 'Teddy Boys.' From now on, juvenile delinquents were Teddy Boys, and Teddy Boys were juvenile delinquents: the two were bootlace-tight.

"This sartorially savvy street-army instantly became the scapegoat for society's ills, a sickness of the age, the cause of all the problems. It was an unfair and illogical argument, but defending the line too strongly would obscure the fact that many a Ted enjoyed trouble, and plenty carried flick-knives, knuckle-dusters, studded belts or bicycle chains. Few were angels, no matter how much they loved their mum; if you saw even one Ted coming toward you on the street, it was always a good idea to run.

"Inevitably, the more the Teddy Boy became public enemy number one, the more many found it attractive. Adopting the fashion of the reviled was a critical adolescent statement. Teddy Boys suddenly rose up all over Britain, especially in places of social deprivation -- of which there were many"