Today's encore selection -- from The Canon by Natalie Angier. The emptiness of space and the distances between planets and stars:

"To gain a richer sense of cosmic proportions, we can paraphrase William Blake, and see the Earth as a fine grain of sand. The sun, then would be an orange-sized object twenty feet away while Jupiter the biggest planet of the solar system would be a pebble eighty-four feet in the other direction -- almost the length of a basketball court -- and the outermost orbs of the solar system, Neptune and Pluto, would be larger and smaller grains, respectively, found at a distance of two and a quarter blocks from Granule Earth.

"Beyond that, the gaps between scenic vistas become absurd and it's best to settle in for a nice comfy coma. Assuming our little orrery of a solar system is tucked into a quiet neighborhood in Newark, New Jersey, you won't reach the next stars -- the Alpha Centauri triple star system -- until somewhere just west of Omaha, or the star after that until the foothills of the Rockies. And in between astronomical objects is lots and lots of space, silky, sullen, inky-dinky space, plenty of nothing, nulls within voids. Just as the dominion of the very small, the interior of the atom is composed almost entirely of empty space, so, too, is the kingdom of the heavens. Nature, it seems, adores a vacuum. 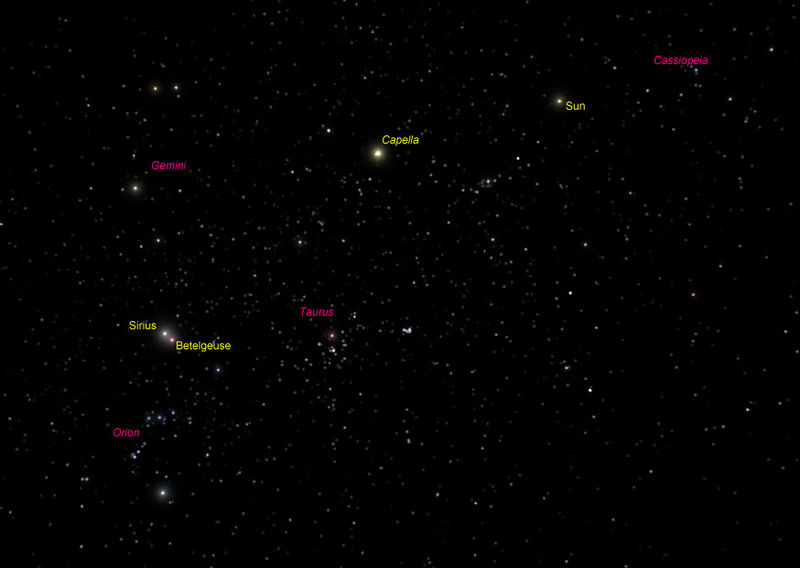 Sky in the Orion region as seen from Alpha Centauri

" 'The universe is a pretty empty place and that's something most people don't get,' said Michael Brown of Caltech. 'You go watch Star Wars and you see the heroes flying through an asteroid belt, and they're twisting and turning nonstop to avoid colliding with asteroids.' In reality, he said when the Galileo spacecraft flew through our solar system's asteroid belt in the early 1990s, NASA spent millions of dollars in a manic effort to steer the ship close enough to one of the rubble rocks to take photos and maybe sample a bit of its dust. 'And when they got lucky and the spacecraft actually passed by two asteroids it was considered truly amazing' said Brown. 'For most of Galileo's journey there was nothing. Nothing to see, nothing to take pretty pictures of. And we're talking about the solar system which is a fairly dense region of the universe.'

"Don't be fooled by the gorgeous pictures of dazzling pinwheel galaxies with sunnyside bulges in their midsections, either. They, too, are mostly ghostly: the average separation between stars is about 100,000 times greater than the distance between us and the Sun. Yes, our Milky Way has about 300 billion stars to its credit but those stars are dispersed across a chasmic piece of property 100,000 light-years in diameter. That's roughly 6 trillion miles (the distance light travels in a year) multiplied by 100,000 ... miles wide. Even using the shrunken scale of a citrus sun lying just twenty feet away from our sand-grain Earth, crossing the galaxy would require a trip of more than 24 million miles."