Today's selection -- from Avoiding the Fall by Michael Pettis. China's success in exports is well known and is often a political lightning rod -- witness the complaints of U.S. politicians regarding China's "undervalued currency." What is less well known is that China's dependence on exports has left it with a highly unbalanced economy, with its business or production sector much larger than the household sector when compared to more developed countries. Further, this export competitiveness has disadvantaged China's households as compared to its businesses. This leaves China in a trap of sorts -- any move to try and rebalance its economy or alleviate this disadvantage to its households will leave it less competitive in the export markets:

"There are in fact three main mechanisms that explain the relatively low price of Chinese exports abroad, all of which transfer income from Chinese households to subsidize Chinese producers, albeit in very different ways. ... 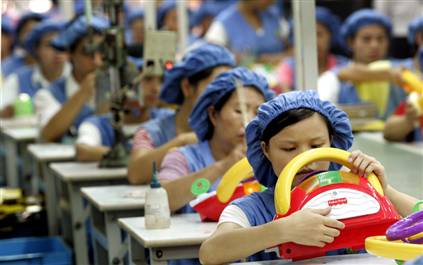 "The currency regime is certainly one of them, and the mechanism is fairly easy to understand. An undervalued currency spurs export competitiveness by subsidizing the local cost component for manufacturers. These implicit subsidies are effectively paid for by Chinese households in the form of artificially high prices for imported goods. Because all households, except perhaps subsistence farmers, are effectively net importers, an undervalued currency is a kind of consumption tax that effectively reduces the real value of their income.

"The second mechanism, the difference between wage and productivity growth, does the same thing but with a different set of winners and losers. Chinese workers' wages have grown more slowly than productivity for all but the last two years of the past three decades, which means that until two years ago workers have received a steadily declining share of what they produce. Manufacturers and other employers benefit from this process because their wage payments are effectively subsidized, so the more labor-intensive production is, the greater the subsidy they implicitly receive.

"The third mechanism, the most important, is artificially low interest rates. These reduce household income by reducing the return households receive on bank deposits; because of legal constraints on investment alternatives, the bulk of savings in China is in the form of bank deposits. Artificially lowered interest rates, however, increase manufacturing competitiveness by lowering the cost of capital. Of course, the more capital-intensive a manufacturer is, the more it benefits. ...

"Because they boost economic growth at the expense of households, these three mechanisms cause the economy to grow much faster than household income. ... This is the root of China's unbalanced economy -- household income has grown so much more slowly than the economy that household consumption over the past three decades has collapsed as a share of GDP.

"Rebalancing in China means by definition, however, that the household consumption share of GDP must rise, and the only effective way to do this is by raising the household income share of GDP. Revaluing the currency is one way of doing so. It increases the real income of households by reducing the cost of imports, and it raises local production costs for manufacturers.

"But revaluing the currency is not the only way. Raising Chinese wages increases household income, too, while increasing labor costs for manufacturers. Finally, allowing interest rates to rise benefits households by increasing the return on savings, and it raises costs for capital-intensive manufacturers.

"As China rebalances, by definition Chinese household income must rise as a share of total GDP. This is the important point that is often forgotten in the debate about Chinese competitiveness. In the aggregate, as China rebalances, the net impact of changes in all three mechanisms must result in reduced subsidies to Chinese manufacturers and so, at least initially, in reduced Chinese competiveness abroad."