Today's selection -- from Close to Shore by Michael Capuzzo. In the early 1900s, a combination of newly acquired leisure time and rising incomes, coupled with new roads and train routes, led large numbers of Americans to the beach. The young, like Lord Byron and the European Romantics from a century before, swam "not to traverse water but to explore every sensation of the soul." Those whose "swimming costumes" were too risqué were sometimes arrested:

"In [the late 1800s] it was frowned upon for both sexes to be in the water at the same time, even a body of water as big as the Atlantic. Ocean swimming was chaste. In [that] time European women entered the ocean in horse-drawn 'bathing machines,' small, roofless cabins on wheels complete with windows and drapes, where a modest woman could enjoy the healing waters of the sea free from prying male eyes. 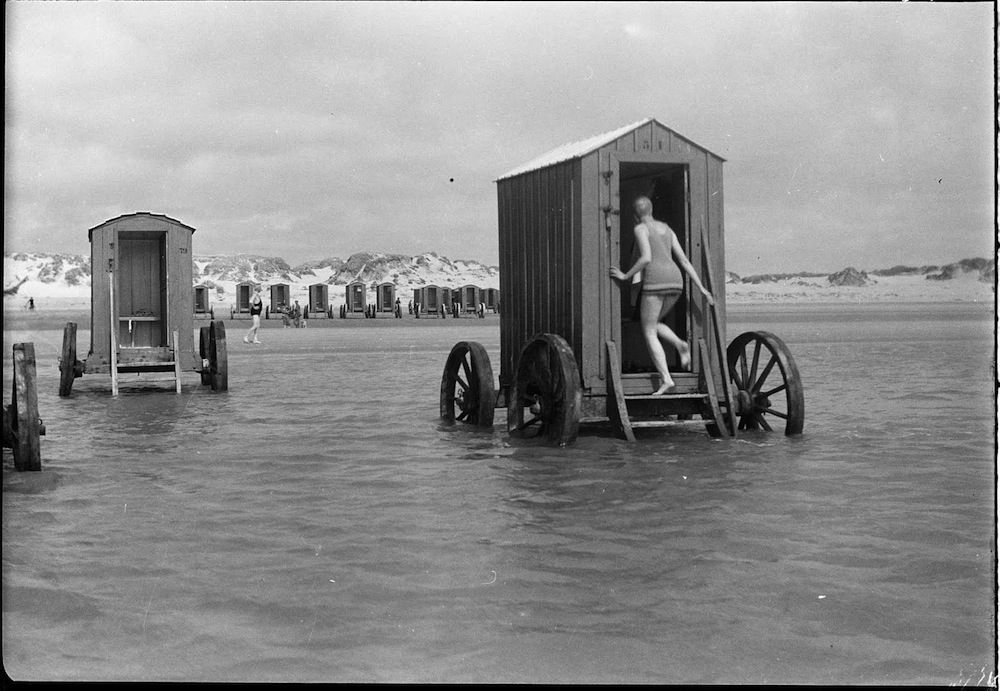 "The modern beach [of 1916] was a hedonistic Xanadu that shocked [older Americans]. In the caress of the warm sea (which the Romantics equated with sex), the styles and mores of the past were relaxed, flesh bared, the cult of the body risen, Pan idealized, Venus reborn. To the sea, young men and women vanished in roadsters, entwined in the privacy of a movable parlor. At the ocean they kissed in the seaside bathhouses where burlesque postcards were sold. Women sheared their hair, smoked cigarettes, and drove automobiles. Young women bared arms and shoulders to the sun and waves. The power of the female form inspired gawkers, shocked or aroused. There was alcohol, dancing, suggestive songs. ... Many Americans could deny 'the problem of the young' until F. Scott Fitzgerald raised the banner for wanton youth in 1920 in This Side of Paradise, revealing that most nice girls in fashionable cities had kissed many boys. Yet at the seashore in 1916 there was ample evidence of the new freedoms to worry them. The dissolution of the formal nineteenth-century world they knew was first revealed at the beach, as if the restive ocean were the agent of change and the shoreline the advance guard. 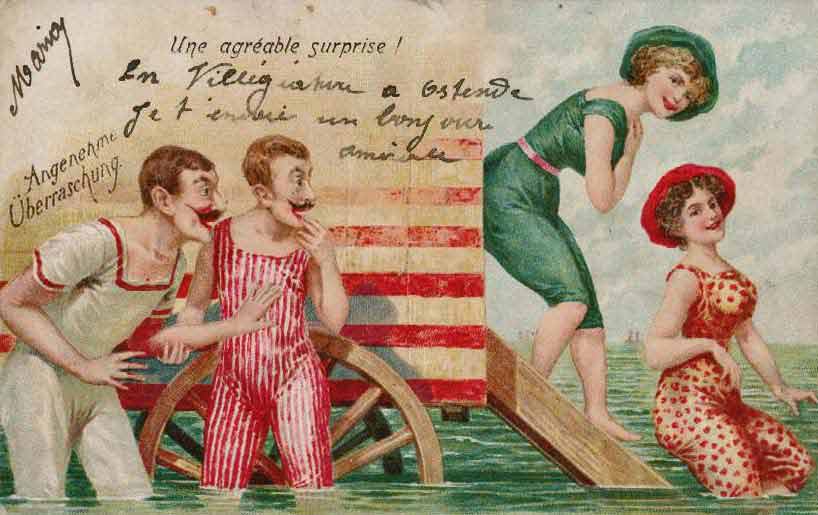 "The most shocking development was in the water, where the rising hems of swimming costumes became a battle line drawn by the Victorian establishment. In that summer of 1916, there was a cultural revolution over the ideal female form -- the cover-all Victorian skirt-and-trouser bathing costumes gave way to lithe, form-fitting swimsuits, and the modern American image, practical and sensual, was born. The appearance of languorous female arms, legs, and calves as public erotic zones roused a national scandal. On Coney Island, police matrons wrestled women in the new clinging wool 'tube' suits out of the surf. In Chicago, police escorted young women from the Lake Michigan beach because they had bared their arms and legs. In Atlantic City, a woman was attacked by a mob for revealing a short span of thigh. The American Association of Park Superintendents stepped into the fray with official Bathing Suit Regulations, requiring trunks 'not shorter than four inches above the knee' and skirts no higher than 'two inches above the bottom of the trunks.' Police took to the beaches with tape measures and made mass arrests. ...

"Atlantic City -- the glittering sea metropolis of four hundred hotels and fifty thousand guests only ten miles south of tiny Beach Haven -- was a seat of the rebellion, the Philadelphia Evening Bulletin reported. Under the headline 'Startling Hosiery Fad Rules the Beach,' the Bulletin noted that ladies wore bathing socks rolled down instead of up, exposing the knee. This moment was a turning point in American fashion; once that line was crossed, more flesh and less fabric became the style of the twentieth century. 'The very modish thing ... is reminiscent of the Highland laddies in the wee kilties, which permit the air of Heaven to play freely on their braw limbs,' the Bulletin noted. 'The mode is popular among the damsels who have dimples in their knees."