Today's selection -- from Bonobo: The Forgotten Ape by Frans de Waal & Frans Lanting. Along with the chimpanzee, the bonobo is the closest surviving relative to humans. Unlike the chimpanzee, which solves conflict with aggression, the bonobo seems to resolve conflict or power struggles with sex:

"Indi­cations are that bonobos resolve the question of  'who gets what, when, and how' by different, somewhat subtler means. The chimpanzee tries to gain influence and get the upper hand, whereas the bonobo follows a less power­ hungry scheme. After all, there are many ways to get what one wants, and in bonobo society, the accent seems to have shifted towards peaceful settlement of conflicts of interest.

"As soon as caretakers at a zoo approach bonobos with food, the males de­velop erections. Even before the food is thrown into the enclosure, the apes are inviting one another to sex: males invite females, females invite males, and GG-­rubbing [genito-genital rubbing] among females is also common. What is all this sex about? The sim­plest explanation would seem that excitement over food sparks over into sex­ual arousal, as if enthusiasm for food and sex get mixed up. This could well be the case, yet a third factor is probably the real underlying cause: competition.

"In all animals, attractive food strains the relationships. There are two rea­sons to believe that sexual activity is the bonobo's answer to this circum­stance. First, anything, not just food, that arouses the interest of more than one bonobo may trigger sexual contact. For example, if two bonobos approach a cardboard box given to them, they will briefly mount each other before play­ing with the box. I have even seen adult females GG-rub when one had only found a little piece of frayed rope and another hurried over for a closer look. Such situations often cause squabbles in other species, whereas bonobos are quite tolerant. They use sex to divert attention and change the tone of the encounter.

"Second, sex often occurs in aggressive situations that have nothing to do with food. For example, after one male has chased another away from a female, the two may engage in a scrotal rub. Or when one female has hit a juvenile, and the juvenile's mother has come to its defense, the problem may be re­solved by intense GG-rubbing between the two adults. Based on hundreds of such incidents, my study produced the first solid evidence for sexual behavior as a mechanism to overcome social tensions. This function is not absent in other animals (or humans, for that matter), but the art of sexual reconciliation may well have reached its evolutionary peak in the bonobo."

with all thanks to sc. 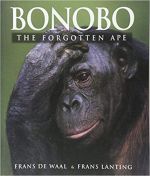