Today's selection -- from Moroni edited by Aimee Ng, Simone Facchinetti, and Arturo Galansino. The Renaissance brought forth an astonishingly talented group of artists who elevated the portrait to new heights of technique and realism--including Botticelli, Da Vinci, Michelangelo, Raphael, Durer, Van Eyck and many more. One of the most prolific was Giovanni Battista Moroni:

"Moroni displays a range of techniques in his representation of objects. Again, the condi­tion of individual works must be taken into account when comparing the physical application of paint, though fortunately many of Moroni's paintings survive in excellent surface condi­tion. The Portrait of a Young Woman exemplifies his varied and dynamic handling of paint in a single composition. Extreme precision renders the woman's brilliant ruff and the ornaments in her hair. The depiction of her dress -- which seems to be made of bro­caded silk with silver-gilt and silver thread -- is lively and fresh, with generous graphic hatching that creates the illusion of texture and reflection of light. Meanwhile, on close inspection, her necklace, which appears highly naturalistic from a distance, is composed of generalized, nearly abstracted forms so that the illusion of precious metal and gems dissolves into dabs of paint. A similar diversity in handling and manipulation of paint according to different types of objects appears in Moroni's other portraits of women, such as Angelica Agliardi de Nicolinis and the Bust of a Woman of Thirty Years of Age.

"In the context of these portraits, Moroni's Portrait of a Young Woman (also known as Woman with a Fan) stands out as an exception. Scholars often draw attention to its similarities in pose and style of dress to the Portrait of a Young Woman, but the disparity in handling between the two, especially in the treatment of textile and acces­sories, has not been sufficiently addressed. In Woman with a Fan, flatness in the handling of the red textile and black patterning on the sleeves contrasts with the meticulously applied highlights, indications of texture, and variation of color in the Portrait of a Young Woman and in Moroni's treatment of patterned fabric in general. At the back of the sitter's head in Woman with a Fan, the schematic scrolls and dangling metallic elements find no corollary in any other work by Moroni. Her ruff lacks the deep pockets of gray shadow that create the sense of volume and lightness in his typical representations of ruffs.

Above all, the sitter's fan and jewelry in the Woman with a Fan are rendered with a pre­cision unparalleled in the artist's corpus. Comparison among details of necklaces in his other portraits of women and the pearl necklace in the Woman with a Fan presents an obvious contrast in handling and degree of naturalistic detail; the closer one looks at the latter, the more details become apparent. The portrait's patron may have requested an accurate depiction of the subject's attire and accessories and consequently paid more for the portrait than was usual. Lorenzo Lotto, for example, appears to have been paid more for the double portrait now in the Prado, for which it was specified that the sitters would be depicted wearing clothes of silk, caps, and necklaces. Perhaps Moroni was asked not only to include the sitter's accessories but also to paint them in a highly descriptive manner." 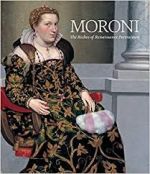