Today's selection -- from Manet and Modern Beauty by Edited by Scott Allan, Emily A. Beeny, and Gloria Groom. Details from the paintings of Edouard Manet:

"Fruits and flowers. A couple of apples, some plums, twin almonds, a pair of cherries, a chestnut, a daisy, a rose, an iris, a bouquet. Occasionally a cat, a snail or two, a buzzing bee, a couple of salamanders, a watering can, the trunk of a garden tree, and other miscellanea. An elegant mark in watercolor, a delicate stroke, a brief touch of color, a hint of lavender and jonquil, a deft gesture in aquarelle. A playful pun, a poem, some gallantry, a bit of flirtation here, a dash of wit there. One or two or more roundnesses, appearing to cast shadows on the flatness of the paper, on which a quick hand has scrawled a hasty note to a friend. Though sometimes the page is blank, with nothing but initials for a signature or just nothing at all. Sometimes the blossom on the paper is frankly decorative and declares its surface to be flat, a piece of japoniste haiku. Sometimes a pretty female profile headlines a page, or daintily shod feet and a nicely turned ankle beneath a lifted petticoat appear beneath lines of handwriting. Or a couple of empty hats sit by themselves on a sheet of paper, declaring more than a passing interest in articles of female fashion.

"Manet's little nothings in watercolor date largely from a single year during the period leading up to his last great painting, A Bar at the Folies-Bergere of 1882, itself diminished in size compared to the painter's notorious Salon paintings of the 1860s. That year was one of illness and suburban convalescence, in which he likely began his poignant 'last flowers,' as they have been called. During that time his oil paintings also tended toward smallness of size, subject, and ambition. How do we square such frivolities, such small-scale dalliance in a minor key, with Manet's outsize reputation, garnered during his first decade of work, as the scandalous painter of Olympia and Luncheon on the Grass and the paterfamilias of the French avant-garde of the second half of the nineteenth century? Was it just a recuperative interlude?

"On the contrary ... these illustrated letters and other related works in watercolor on notepaper are significant demonstrations of Manet's intelligence as a painter. Indeed, pointing to the continuities of his painterly thought, minus the self-conscious reach of ambition, they operate as abbreviated statements of prin­ciple, as follows: the visual register shares space with the verbal, the pictorial with the linguistic; the means of visual illusion are coterminous with the manual devices of writing, dependent on the flat surface of the paper support, and the magic of marks that make something out of nothing in the eye and mind of the reader and the viewer the image operates in a realm of dialogue and exchange between a sender and a receiver; and that realm is a sexed realm, in which semiotic intercourse between the masculine and the feminine takes place. These are all statements of principle that rely on their own little-nothingness.

"When Manet painted his two most famous canvases in 1863, exhibiting first Luncheon on the Grass that year in the Salon des Refusés and then Olympia in the Salon of 1865, few had anything to say about the hat, clothing, and fruit in the lower left corner of the one or the bunch of flowers brought in by the maid on the right in the other; there were larger, more important things to attend to if one wished to be properly scandalized. Yet the still life in the one was instrumental in updating its Renaissance-based nudity to the then contemporary world. And without the bouquet in the other, the notion of a sexual exchange -- of a client sending a prostitute or more likely a lover sending his mistress, a plea for her favors -- might not have entered anyone's head. Once observed, that bouquet -- upon whose explosion of color Emile Zola did remark -- sends the attentive viewer on a tour around the less noticed margins of the painting, to a pair of blue-banded white satin slippers, a glimpse of toes, a black cat almost disappearing into the shadows, an embroidered and fringed silk shawl, a gold bangle, and then back up and around to a flower in a white woman's red hair and a coral earring on a black maid's ear. The path opened up by the bouquet is a circuit of minor details, redolent with significance; cartoonists settled on that bouquet, like the cat, as a means of both condensing and expanding on the sexual implications of the painting." 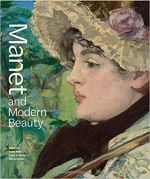