Today's encore selection -- from Teach Like a Champion 2.0: 62 Techniques that Put Students on the Path to College by Doug Lemov. Error is normal, and making mistakes is a necessary part of learning. In Teach Like a Champion, Doug Lemov's brilliant distillation of 49 techniques for teachers to use to improve student performance, he writes that teachers should normalize error and avoid chastening students for getting it wrong. (Lemov's book has application far beyond the classroom):

"Error followed by correction and instruction is the fundamental process of schooling. You get it wrong, and then you get it right. If getting it wrong and then getting it right is normal, teachers should Normalize Error and respond to both parts of this sequence as if they were totally and completely normal. After all, they are.

"Avoid chastening wrong answers, for example, 'No, we already talked about this. You have to flip the sign, Ruben.' And do not make excuses for students who get answers wrong: 'Oh, that's okay, Charlise. That was a really hard one.' In fact, if wrong answers are truly a normal and healthy part of the learning process, they don't need much narration at all.

"It's better, in fact, to avoid spending a lot of time talking about wrongness and get down to the work of fixing it as quickly as possible. Although many teachers feel obligated to name every answer as right or wrong, spending time making that judgment is usually a step you can skip entirely before getting to work. For example, you could respond to a wrong answer by a student named Noah by saying, 'Let's try that again, Noah. What's the first thing we have to do?' or even, 'What's the first thing we have to do in solving this kind of problem, Noah?' This second situation is particularly interesting because it remains ambiguous to Noah and his classmates whether the answer was right or wrong as they start reworking the problem. There's a bit of suspense, and they will have to figure it out for themselves. When and if you do name an answer as wrong, do so quickly and simply ('not quite') and keep moving. Again, since getting it wrong is normal, you don't have to feel badly about it. In fact, if all students are getting all questions right, the work you're giving them isn't hard enough.

"Praising right answers can have one of two perverse effects on students. If you make too much of fuss, you suggest to students -- unless it's patently obvious that an answer really is exceptional -- that you're surprised that they got the answer right. And as a variety of social science research has recently documented, praising students for being 'smart' perversely incents them not to take risks (apparently they worry about no longer looking smart if they get things wrong), in contrast to praising students for working hard, which incents them to take risks and take on challenges.

"Thus, in most cases when a student gets an answer correct, acknowledge that the student has done the work correctly or has worked hard; then move on: 'That's right, Noah. Nice work.' Champion teachers show their students they expect both right and wrong to happen by not making too big a deal of either. Of course, there will be times when you want to sprinkle in stronger praise ('Such an insightful answer, Carla. Awesome'). Just do so carefully so that such praise isn't diluted by overuse."

[Editor's note: We were reminded of this principle recently when touring the Franklin Institute's nationally recognized Science Leadership Academy and finding that the powerful learning mantra of the engineering department was "fail early, fail often."] 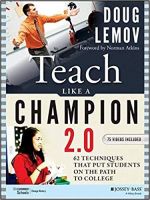