Today's selection -- from Hawkers & Walkers In Early America by Richardson Wright. Some of the most prominent businessmen in early American history got their start as "Yankee peddlers." One example -- Collis P. Huntington spent six years as a penniless Yankee peddler then went on to become fabulously wealthy as an owner of the Transcontinental Railroad:

"Each generation of young Americans has discovered its own vivid, distinctive, and picturesque variations of adven­ture. Trading with the savage Indian in the depths of the wilderness furnished enough excitement to satisfy the most lusty of youths. Indian wars and wars with other nations gave abundant outlets for the excess energy of young men who dreamed fierce dreams. Between these military forays, many youths found excitement and, incidentally, their busi­ness education, along the easier-going-but none the less adventuresome paths of peaceful commerce that threaded their way from settlement to settlement and penetrated the awesome, virgin stretches of the frontiers.

"For a long time in this country an active form of selling goods was peddling. Most of the peddlers, or chapmen, as they were often called, hailed from New England, Connecti­cut especially.

"Their trade fell into various branches. There were the general peddlers, who hawked an assortment of useful 'Yan­kee notions' -- pins, needles, hooks and eyes, scissors, razors, combs, coat and buttons, spoons, small hardware, chil­dren's books, cotton goods, lace and perfume. Besides there were the specialized itinerant dealers-tin-peddlers, clock­peddlers, chair-peddlers, peddlers of spices, essences, dyes, woodenware, pottery, brooms, books, and a host of other items; and even these specialists, as we shall see, often carried several side lines of goods and did many other things beside selling their wares. Sometimes they vended very cumber­some articles -- washing machines, spinning wheels, cabinet organs, and winnowing machines and corn shellers. ...

"Although in Colonial times the peddler's stock was limited to a few items, by 1830 it had extended to all sorts of mer­chandise. Large wagons loaded with drygoods, hats, boots, shoes, clocks, firearms, hardware, and even furniture became a common sight on our country roads.

"From house to house the peddler went, from town to town. And quite a flutter he caused when he appeared on the village green and opened his pack. Women dropped their chores and men their work, and gathered about to hear gossip of the neighbourhoods the peddler had recently left, and to see his wares.

"A peripatetic merchant, he showed up wherever there was a chance for a sale. Not only did he visit the isolated country homes with his stock of goods, but he managed to be present on market days in town, at venues or auction sales, on military training days, and at the spring and autumn coun­try fairs. May and November were the usual months for these fairs, and sometimes they lasted three days. To them farmers brought their horses and cattle for sale and sundry goods of household manufacture. There were sports and bouts of all kinds, accompanied by a noise of blaring trumpets and scratchy fiddles and screeching whistles and of people having a good time. ...

"The early peddler, if contemporary documents are to be believed, was a lanky and hawk-beaked youth; an adventur­ous, brave, mercenary fellow, who had a rare understanding of human nature and a ready tongue. His most effective salesmanship was the 'soft sawder' of flattery. He was ac­cused of purveying wooden nutmegs and cucumber seeds, oak-leaf cigars, shoe-peg oats, polyglot Bibles (all in English) and realistically painted basswood hams. He was, moreover, a commercial bird of passage. He always left his customers convinced and satisfied with their share of the bargain, but he usually managed to clear out after finishing his deal." 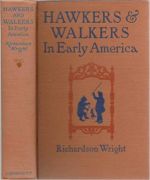