Today's encore selection -- from Open: An Autobiography by Andre Agassi. In 1994, Andre Agassi found himself at a crossroads. He was young, one of the brightest stars in tennis, but had underachieved in his career. So Agassi and his manager approached Brad Gilbert -- a fiery, veteran tennis player of good ability known as an overachiever -- to offer him the job as Agassi's coach. But first, they wanted to hear Gilbert's assessment of Agassi's abilities:

"When Brad is finally settled, half a cold Bud Ice down his gullet, [my manager] starts.

"So, listen, Brad, one reason we wanted to meet with you is, we want to get your take on Andre's game.

"Andre's game. We'd like you to tell us what you think.

"You want to know what I think of his game?

"You want me to be honest?

"He takes an enormous swallow of beer and commences a careful, thorough, brutal-as-advertised summary of my flaws as a tennis player.

"It's not rocket science, he says. If I were you, with your skills, your talent, your return and footwork, I'd dominate. But you've lost the fire you had when you were sixteen. That kid, taking the ball early, being aggressive, what the hell happened to that kid?

"You always try to be perfect, he says, and you always fall short, and it f**ks with your head. Your confidence is shot, and perfectionism is the reason. You try to hit a winner on every ball, when just being steady, consistent, meat and potatoes, would be enough to win ninety percent of the time.

"He talks a mile a minute, a constant drone, not unlike a mosquito. He builds his argument with sports metaphors, from all sports, indiscriminately. He's an avid sports fan, and an equally avid metaphor fan.

"Quit going for the knockout, he says. Stop swinging for the fences. All you have to be is solid. Singles, doubles, move the chains forward. Stop thinking about yourself, and your own game, and remember that the guy on the other side of the net has weaknesses. Attack his weaknesses. You don't have to be the best in the world every time you go out there. You just have to be better than one guy. Instead of you succeeding, make him fail. Better yet, let him fail. It's all about odds and percentages. You're from Vegas, you should have an appreciation of odds and percentages. The house always wins, right? Why? Because the odds are stacked in the house's favor. So? Be the house! Get the odds in your favor.

"Right now, by trying for a perfect shot with every ball, you're stacking the odds against yourself. You're assuming too much risk. You don't need to assume so much risk. F**k that. Just keep the ball moving. Back and forth. Nice and easy. Solid. Be like gravity, man, just like motherf**king gravity. When you chase perfection, when you make perfection the ultimate goal, do you know what you're doing? You're chasing something that doesn't exist. You're making everyone around you miserable. You're making yourself miserable. Perfection? There's about five times a year you wake up perfect, when you can't lose to anybody, but it's not those five times a year that make a tennis player. Or a human being, for that matter. It's the other times. It's all about your head, man. With your talent, if you're fifty percent game-wise, but ninety-five percent head-wise, you're going to win. But if you're ninety-five percent game-wise and fifty percent head-wise, you're going to lose, lose, lose."

[Delanceyplace Note: Under Gilbert, Agassi went on to one of the most successful periods of his career] 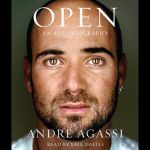