"The Breakfast Club had recently been released, and with its success coming on the heels of Sixteen Candles, both John and Molly Ringwald were in an enviable position. A new type of teen film was emerging and John was the visionary behind it, with Molly as his muse. John's movies had a singular voice, confidence, and sincerity. Molly was equally assured, unique and raw. Pretty in Pink was to be their next collaboration. John had written the movie for Molly but he was going to only produce the film, handing the directing chore over to a soft­hearted, self-deprecating New York neurotic named Howard Deutch. All I cared about at this point was that they were coming to New York and, according to my agent, weren't interested in auditioning me. They were looking for a 'hunk,' a 'star quarterback type,' to play the rich love interest to Mol­ly's girl from the wrong side of the tracks. I was informed I did not fit the bill.

"But with St. Elmo's Fire coming out soon, there was a bit of prerelease buzz. In some conversations -- primarily the ones initiated by movie publicists -- it was being called 'the young Big Chill,' an ensemble film filled with stars a decade older, stars like William Hurt and Kevin Kline. (In fact, when St. Elmo's Fire was released a few months later, one reviewer called it 'a poor man's Big Chill, a day late and a dollar short.' At least the publicists had done their job and gotten the two films spoken of in the same sentence.) And because of that chatter about my soon-to-be-released movie (you are never more intriguing than before anyone has seen your work), I was awarded a courtesy audition.

"I waited my turn out in the hall. Most of the time actors go into an audition room and read the scene with a casting assistant -- usually a well-meaning person and a terrible actor. But in this case Molly was there, seated beside the video cam­era. At the time, I had not seen any of Molly's films, although it would have been impossible not to recognize her after walk­ing past my newsstand on Sheridan Square and seeing all the magazine covers with her likeness. Behind her, leaning for­ward, elbows on his knees, perched an eager, dark-haired, and well-intentioned man: the director, Howie. Then in the back of the room, behind the equipment, hands stuffed deep into the pockets of his baggy trousers as he tilted his chair back up on two legs, bobbing against the wall, was a blond-haired, soft-featured man with wire glasses: Hughes. He nodded in my general direction and never spoke.

"I did my bit. Molly was attentive and read with care. No one else showed much interest.

"'Thanks for coming in,' the casting associate muttered. 'Fuck 'em,' I thought on the way out.

"Once the door was shut, Molly apparently turned to John and said, 'That's the kind of guy I would fall for.'

"John wasn't convinced, but over the next few days the calls to my agent went from 'He did a nice job' to 'We like him a lot for this.' It was testament to John's belief in Molly that he got behind the idea and cast me. It was another example of what I believe was the key to John's success in his youth films. Not only on-screen did John give young people credit for being full human beings with opinions worth listening to; he carried this line of thinking through in all areas. Later, on set, John brought a small boom box around and between setups would play snatches of music and ask for the actors' opinions. He was gathering information for what would become the sound track, and he wisely solicited the ears of the generation who would be listening. That sound track was as responsible for the success of the film as what appeared on the screen.

"As I was offered the job only a short time before filming, and since there was no question of whether or not I would do the film, I returned to my old schoolboy ways and felt no need to read the script -- until I was on the plane out to Los Angeles to begin shoot­ing. The basic plot of the film -- which John boasted he wrote in a weekend -- hung on Molly's character, named Andie, wanting to go to her school prom with my character, Blane. In the end, peer pressure proves too much for Blane and he stands Andie up on the big night. Blane mopes at home and Andie takes comfort in her best friend; lesson learned. In the few scenes I had read of the script, it never occurred to me that Blane would lack moral conviction and back out. Reading on the plane, I was shocked by his spineless nature. Upon landing, I called my manager, Mary, and complained,

"'Honey, you read the script,' Mary replied. 'You knew what happened.' 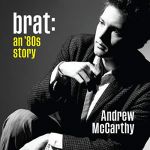