"Near the mediaeval town of Gubbio, Italy, a narrow gorge slices deep into the Apennine Mountains. Rocks along the can­yon walls may strike casual observers as monotonous, layer after layer of fine-grained limestone deposited long ago on a deep seafloor. The limestones are full of fossils -- in fact, they consist mainly of the tiny calcium carbonate skeletons of pro­tozoans called foraminiferans and microscopic algae called coccolithophorids -- but because of their minute size, these re­mains aren't apparent in the rock face. There is one curious fea­ture, however, if you look carefully in just the right place. Above hundreds of meters of limestone and beneath many more simi­lar beds, there is a half-inch (1 centimeter) layer of clay with no carbonate minerals at all. Take the limestones back to the lab to study, bed by bed, under the microscope and you'll find another puzzle: few of the microfossil species found below the clay layer persist above it.

"The clay layer at Gubbio marks the boundary between the Cretaceous and Paleogene periods -- and the Mesozoic and Cenozoic eras -- a fence in time at 66 million years ago that sep­arates distinctly different biotas both on land and in the sea.

"In marine rocks, the microfossil species used to reconstruct Mesozoic time disappear, seemingly in an instant. Ammonites, squid relatives that were among the most abundant and diverse carnivores in Mesozoic oceans, also disappear en masse, as do myriad other species. On land, the long-dominant dinosaurs breathed their last. All, it turns out, at the exact moment in time represented by the Gubbio clay layer.

"In the late 1970s, geologist Walter Alvarez traveled to Gub­bio to study the magnetic properties of its thick limestone beds, and that singular clay layer caught his attention. How much time might it represent? Walt raised the question with his fa­ther, physicist and Nobel laureate Luis Alvarez. The problem was easy, replied Alvarez père; tiny micrometeorites constantly rain down through the atmosphere and do so at known rates. These heavenly messengers contain elements like iridium that are rare in Earth surface materials, so if Walt measured the amount of iridium in the clay layer, he could calculate the time it took to accumulate. With chemists Frank Asaro and Helen Michel, he did just that, calculating from its high iridium con­tent that the clay layer must have taken millions of years to form, an answer that Walt knew had to be wrong -- marvelously, spectacularly, and instructively wrong, as it turned out.

"If the iridium enrichment in the clay didn't reflect slow rates of accumulation over long timescales, the alternative was a lot of iridium deposited quickly, most likely by the impact of a large meteorite; Alvarez and his colleagues calculated the required size to be nearly seven miles (eleven kilometers) in diameter. The planetary effect of such a collision would be catastrophic, providing a mechanism for the extinction of dinosaurs and all the other plant, animal, and microscopic species that never saw dawn break on the Paleogene Period.

"Published in 1980, the Alvarez team's paper was a sensa­tion, generating supporters and skeptics in equal measure. The controversy lasted for a decade or so until accumulating data tipped the scales decisively in the Alvarez' favor. …

"Like other questions in science, the Alvarez hypothesis wasn't settled by a vote. The hypothesis made predictions about other features that should be preserved in the rock record, and geologists all over the world set out to look for them. The iridium anomaly showed up in boundary rocks around the world, but not in older or younger beds. And soon, distinctive minerals called shocked quartz were discovered in rocks deposited at the same point in time. Shocked quartz forms only under conditions of transiently high temperature and pressure, conditions generated by the impact of a large meteorite. And in time, the true smoking gun was identified: a meteorite crater some 125 miles (200 kilo­meters) in diameter, formed at just the right time and now buried beneath younger sediments in the Yucatan Peninsula. Nearly 170 million years of dinosaur evolution ended in cataclysm." 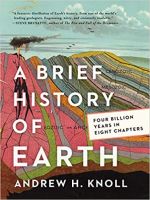