Today's selection -- from Trade Is Not a Four Letter Word by Fred P. Hochberg. In 1962, John F. Kennedy proposed assistance to workers who had lost their jobs due to free trade agreements:

"On January 25, 1962, Kennedy delivered a message to Con­gress outlining a bold new trade platform for the country. In a section at the very end -- after detailing the many merits of greater economic engagement with the world -- he introduced a new idea to America: Trade Adjustment Assistance, which he described succinctly:

'I am also recommending as an essential part of the new trade program that companies, farmers, and workers who suffer dam­age from increased foreign import competition be assisted in their efforts to adjust to that competition. When considerations of national policy make it desirable to avoid higher tariffs, those injured by that competition should not be required to bear the full brunt of the impact. Rather, the burden of economic adjust­ment should be borne in part by the Federal Government.'

"Sounds like a reasonable idea to me. And had we followed through on it, the trade debates of today would probably sound a whole lot different. The idea of Trade Adjustment Assistance (or TAA) was simple: if reducing tariffs led to widespread gains and narrow pains, we could use some of those gains to make up for the pains. Kennedy's plan included three pillars for workers who were hurt by trade, and three for farms and businesses. For workers whose jobs were displaced, TAA would provide direct government payments covering up to about two thirds of their lost wages for a year (or longer, if they were over sixty years old), government-funded vocational training to help them learn new skills, and financial assistance to cover the cost of relocation if they were unable to find work in their community. For companies and farmers, the government would offer free technical support and consultation to help them compete with foreign imports, tax relief rewarding them for modernizing and diversifying their business, and loans and loan guarantees to help them adapt operations. Perhaps wary of the objections that free market zeal­ots were sure to raise, Kennedy did his best to cut them off at the pass, assuring Congress that TAA 'cannot be and will not be a subsidy program of government paternalism .... It is instead a program to afford time for American initiative, American adaptability,  and American resiliency to assert themselves.' And time is an even more critical factor today with the speed of artificial intelligence and automation -- where is Kennedy when we need him?

"It was a nice turn of phrase, and enough to convince a number of Republicans to publicly cross party lines in support of TAA -- ­including, crucially, former president Dwight Eisenhower, who lobbied members of his party to back the bill. In an effort to convince the holdouts that Trade Adjustment Assistance was more than just a handout, Kennedy quipped that 'the accent is on "adjustment" more than "assistance."' Though his plan passed, his effort to distinguish TAA from government interference in the economy fell flat with many free market Republicans. Their objections were more or less predictable, and would be passed down from generation to generation of free market acolytes each time TAA came up for reauthorization every five years or so since. In 2002, for example, Republican senator Don Nickles of Okla­homa referred to TAA as 'pretty socialistic,' while Republican senator Judd Gregg of New Hampshire branded it a 'socialist' idea 'which has explosive potential.' These were pretty remark­able claims, given the fact that TAA had already been around for forty years at that point and hadn't really made much headway in destroying western capitalism.

"On the contrary, TAA actually came in with a whimper, get­ting off to what can only charitably be described as a slow start. The version that Kennedy was able to get through Congress was so conservative with regard to eligibility requirements, in fact, that in the first seven years of TAA's existence, not a single appli­cant received benefits -- it helped no one! This would be reme­died with a major strengthening of the program in 1974; two years later, TAA was serving a modest 62,000 workers who had lost their livelihoods due to the further loosening of trade restric­tions. By the early 1980s, as tariffs continued to fall, TAA cov­ered more than half a million unemployed U.S. workers with direct payments, skills training, and other support. At the urg­ing of Bill Clinton, the program would be updated one more time in 1993 to create specific support services for workers impacted by NAFTA. Clinton had pushed for an even more generous ver­sion of TAA at the time, but was met with determined opposition from across the aisle.

"By 2014, TAA had been used by a total of 2.2 million Americans to adjust to the losses they suffered as a result of trade. There is an argument to be made -- and many have tried -- that the program has been fairly effective. In 2014, more than three quarters of displaced workers who made use of TAA found a new job within six months, and 90 percent of that group still had that job six months later. Those numbers are nothing to dismiss, particularly when you consider that more than half of those enrolled have a high school education or less and are, on average, about fifty years old -- a demographic that has historically strug­gled to change careers after being laid off. Ben Hyman of the New York Federal Reserve has conducted a twenty-year study showing that TAA boosts participants' earnings, and in effect pays for itself; he found that workers who take part in the program end up earning about $50,000 more over a ten-year period than those who don't. There is no doubt that, charges of explosive social­ism aside, TAA is and always has been a well-intentioned effort to do right by the victims of U.S. trade policy. But even if it has helped some number of workers to land on their feet, it's still hard to call it a successful program given everything we know about the scores of displaced American workers who have never gotten their second chance.

"While there remains a vocal faction of free marketers who object to the government stepping in to redirect resources to those who have been hurt by trade, criticism of TAA extends well beyond ideology. For one thing, it doesn't come close to covering the likely number of workers who have been displaced by trade the program just isn't large or well-funded enough to tackle the scope of the challenge. The workers who do successfully land new jobs after using TAA also tend to earn less than they did in their previous jobs -- typically, they end up taking a pay cut of about 20 percent. Many displaced workers simply never hear about TAA, and only about a third of those who enroll end up taking advan­tage of its skills training programs. In addition, those training pro­grams have been chronically underfunded. A popular critique on the right suggests that by doling out money, TAA actually incentivizes laid-off workers not to seek out new jobs speedily ­and it's worth noting that TAA's allowances tend to be a bit more generous than regular unemployment benefits. Moreover, critics are quick to point out that lots of Americans lose their jobs every year for all sorts of reasons that are beyond their control -- why should the victims of trade get special treatment that we don't afford to victims of automation or changing consumer tastes? To that, some would say that because trade-related job losses are a result of policy choices rather than the natural flow of the marketplace, the government bears some responsibility to make things right.

"TAA may enjoy some measure of bipartisan support, but that support could easily be characterized as 'a mile wide and an inch deep.' It hasn't been killed off yet ... but it also has never been especially well funded. It does seem to offer some amount of help to some Americans who have been left behind by the global econ­omy, at least. But you'd be hard-pressed to find anyone who truly believes that it's an effective solution to the problem it was designed to solve. And you'd be even harder-pressed to find any­one who gets particularly excited about it -- labor leader Richard Trumka has described it to me as 'a gold-plated coffin.'

"Perhaps TAA would be better loved if it was better funded, but the tepid support of political leaders over the years suggests that we are unlikely to find out anytime soon. The most telling thing, how­ever, is that TAA is just about the only effort America has made to do right by those who have been hurt by trade. It's been well over half a century since President Kennedy first introduced the idea, and in all that time we have failed as a country to come up with anything better -- our tendency instead has been to look the other way.

"Looking back from our vantage point today, it's clear that compensating the losers of trade with half measures -- or, worse, simply ignoring them -- has cost our country dearly. When Donald Trump made the grievances of America's 'forgotten men and women' a centerpiece of his 2016 presidential campaign, he tapped into a deep well of pain and resentment that we had allowed to fester for years without sunlight or solutions. In midwestern towns where the hum of the local factory had long since gone quiet, 'more funding for Trade Adjustment Assistance' was never going to be a compelling rallying cry. A way of life had change -­something more profound than just the sum of lost jobs­ and politicians offering temporary wage allowances and short-lived training courses simply couldn't make up for the dignity and purpose that had been sapped out of whole communities by time, by technology, and, yes, sometimes by trade. Compensation -- true compensation -- required something more. It still does." 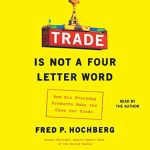