In today's selection -- Jimmy Connors was one of America's greatest tennis champions and an athlete with a reputation as a relentless competitor. At eight years of age, he learned one of life's hardest lessons:

"I'm eight years old and I'm watching a thug beat the shit out of my mother and my grandfather. There's blood on the court. I can't help them. I'm powerless. This day will transform me more than any other event in my life.

"My older brother, Johnny, and I are playing tennis on the public courts in Jones Park, in East St. Louis, Illinois, with Mom and my grandmother, whom we call Two-Mom because she's like our second mom. There are five hard courts in a row and no one else is around. Two guys in their early twenties come over to hang out, and they get on the next court. They place a large transistor radio at the foot of the net post and turn it on full blast. The music is so loud we can't hear Mom giving us instructions across the net. She asks them politely to turn the music down. They ignore her. They are screwing around, yelling and swearing. Mom asks them, again, to please turn it down or move over a court. They call her a bitch. We keep playing.

"My grandfather, who is chief of the parks police, comes over.

"Pops, as we call him, likes to watch us practice. He isn't happy with the guys next to us, but neither is he looking for trouble. We stop and watch as Pop approaches them.

"'Boys, would you mind turning that down a little?'

"One punk starts to bend down; I think he's going to turn off the music. Instead he throws himself at my grandfather, catches him off guard, and tackles him to the concrete.

"The punk straddles Pop, grabs him by the shirt collar, and starts banging his head into the court.

"I don't even notice my mom run over to help her father. When she goes to grab the young guy by the shoulder, he whirls around and punches her right in the mouth. Her teeth go flying. Two-Mom moves toward Johnny and me, but she can't shield us from seeing our mother fall bloody onto the tennis court.

"Then the punks just run away. It happens so fast that it feels like a bad dream, but it's all too real.

"Two-Mom shoos everyone into the car and drives us home. Mom's friend, Booth, takes Mom into the bathroom and puts a towel on her face. At one point Mom pulls the towel away. What teeth she has left in her mouth are shoved through her lips and gums. Johnny screams, 'Put it back! Put it back!' Booth gets mad and pushes Johnny out of the bathroom. Dad arrives and we take Mom and Pop to the hospital.

"In the emergency room, the doctors treat Pop's head wound.

"Then it's Mom's turn. They pull out her last remaining teeth and she gets hundreds of stitches in her mouth.

"That night we try and make Mom comfortable on the couch.

"Then Dad, Johnny, and I go back to the courts and search for Mom's teeth. We think maybe we should save them because they might be able to put them back or something. We just didn't know. 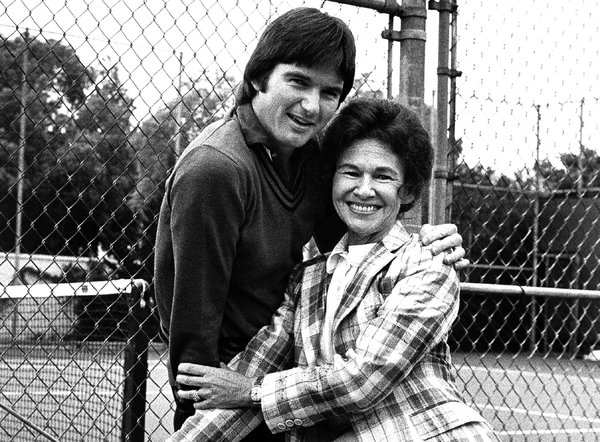 Jimmy Connors and his mother

"The next morning, Mom is resting on the couch when Johnny and I ask if she wants to go hit some tennis balls. We're too young to realize how injured she is. Yet Mom gets up and goes out into the backyard and hits balls with us. Nothing would ever keep her from playing tennis with her boys. She won't be able to pronounce any words for a month. She literally has to learn how to talk again. My mother will struggle with the injuries to her mouth until the day she dies, but she never complains or makes a big deal out of it. She never brings up the beating or uses it as an excuse.

"Johnny and I talked about that day for years after it happened.

"We'd ask each other: Who does that? How does that even happen? How do we let something like that pass? There's no question it had a lasting psychological effect on both of us, but eventually we came to grips with it the best we could. I took my anger and used it in my tennis. Johnny dealt with it by channeling his rage in another way -- by taking it to the streets.

"After watching my mom get battered, the need for revenge ran strong in me, and I found I could use that emotion to achieve it. If she could hit balls the very next day after getting beat up, then I could play for one hour or five hours, no matter how bad my body ached. There's a line that Patrick Swayze has in the movie Road House. After he gets stabbed, the doctor, played by Kelly Lynch, asks Swayze if he enjoys pain, and he says, 'Pain don't hurt.' I understood that.

"I could always find something to drive me, and most of the time it was those feelings of anger and rage that bubbled up from the past."