delanceyplace.com 10/1/13 - the tragedy of the marielitos

"When Americans had hijacked airplanes to Havana, the U.S. government called them criminals, urged the Cubans to prosecute them -- and Castro complied. Now Castro turned the tables. He called on the American government to prosecute Cuban hijackers with the same vigor with which Cuba prosecuted American hijackers. ...

"In early March 1980, following another hijacking, Castro issued a public warning: if the Americans went on giving Cuban criminals a 'hero's welcome,' he would be delighted to send them other lawbreakers as well. A month later Cuban guards were withdrawn from the Peruvian embassy in Havana, which also had followed a policy of granting indiscriminate asylum to all Cubans who asked for it. Within three days nearly eleven thousand Cubans had invaded the embassy compound. If the Peruvians were so determined to take in political dissidents, Cuban officials said, then let them deal with the consequences.

"This was only the dress rehearsal for a much bigger drama. At the end of April, the Cuban government opened the little fishing port of Mariel, just outside Havana, to unrestricted navigation between Cuba and the United States. For years Americans had accused Castro of turning his country into a jail, his people into prisoners. Now Castro called the Americans' bluff: anyone who wanted to leave Cuba could leave. But would the Americans accept them?

"Within days, the Straits of Florida were the scene of a Dunkirk in reverse, as tens of thousands of Cubans invaded the United States in small boats. These newcomers had no passports, no visas -- no more legal right to enter the United States than any of the other illegal aliens U.S. forces constantly intercepted, arrested and deported. Yet the Navy, Coast Guard and Immigration and Naturalization Service did nothing to stop them. Castro not only had sprung his trap, he had baited it well. U.S. officials had no choice but to let wave after wave of undocumented Cubans land in Florida: to turn them back would have proven Castro's claims that the United States was applying a double standard, and given him an even greater propaganda victory. 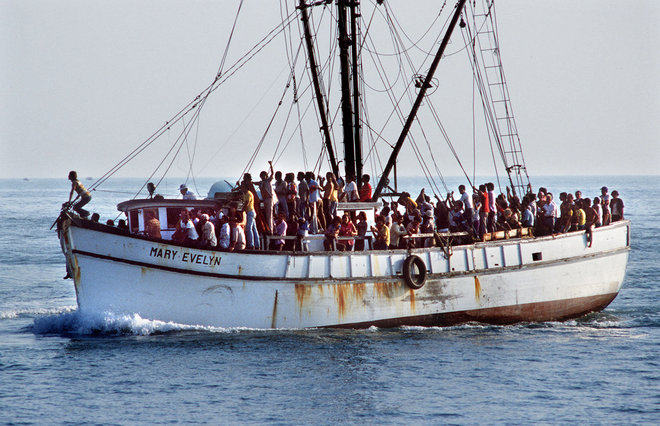 "Officials in Washington tried to conceal their embarrassment. Officials in Havana made no effort to hide their glee. 'This was a very erroneous policy of the Carter administration -- to consider everyone who wanted to leave Cuba for the United States as a heroic dissident,' Cuban vice-president Carlos Rafael Rodriguez told reporters. 'The United States is now paying the consequences.'

"Washington may have made the mistake, but it was Miami that paid the price. Over the next five months, more than 120,000 Cubans sailed north to Florida from Mariel. After landing at Key West, they headed straight for Miami. But these 'heroic dissidents' didn't consist only of Castro's political opponents. Good as his word, he was also getting rid of Cuba's misfits and most hardened criminals.

"Soon the Orange Bowl was packed with penniless refugees all sleeping on bleachers, and with no possessions other than the clothes they wore and a seemingly inexhaustible supply of weapons. Tent City, a collection of leaky canvas shelters and portable toilets that sprang up beneath I-95, the city's main freeway, housed thousands more Marielitos. ...

"Miamians, initially at least, were more ashamed than frightened to find tens of thousands of jobless, homeless, rootless foreigners camping out under their freeway. ... Soon Marielitos were invading South Miami Beach's welfare hotels, mugging its elderly Jewish retirees, robbing its delicatessens, staging cockfights in erstwhile kosher dining rooms. Young male prostitutes now patrolled Lummus Park, where, hitherto, elderly men in yarmulkes and beards had read the Talmud aloud. Taking to the free-enterprise system with a vengeance, other Marielitos turned the Deco district into a drug peddlers' paradise. Still others quickly mastered the intricacies of the food stamp and welfare programs.

"Not all Marielitos found Miami so congenial. Dozens, disenchanted with life in America, hijacked planes back to Cuba, giving Castro new support for his assertions that the promise of America was false. Of the twenty-seven U.S. airliners hijacked to Cuba between the beginning of 1981 and the end of 1983, twenty-four were seized by Cuban 'refugees' so eager to escape the United States they didn't care if returning home meant going to prison:

"Cuban officials pointedly informed the U.S. government that twenty-six persons had been tried, and convicted, for such offenses. ...

"The majority [of the Marielitos] were poor and unskilled. Almost none were the valiant 'freedom fighters' both officials in Washington and people in Miami had imagined all those who wished to leave Castro's Cuba, by definition, had to be. But more than 100,000 out of the 125,000 were basically law-abiding folk. Thousands more -- drug addicts, prostitutes, drifters, flagrant homosexuals, unruly teenagers -- were 'criminals' only by Castro's socialist-puritan standards.

"That, however, couldn't change the fact that many were criminals. Even though more than a thousand convicted felons were arrested upon arrival in the United States, [Cesar] Odio ... estimated that of those who got through to Miami, ten thousand were 'violent types' and two thousand more were hard-core criminals. This was an estimate subsequent events amply bore out. Following the arrival of these 'refugees,' crime in the neighborhoods abutting Tent City increased 400 percent. As the Marielitos learned to find their way around the city, crime statistics -- in every category from rape and murder to petty larceny and auto theft -- soared everywhere else as well.
"