In today's selection -- the Mongols did not just conquer, they completely leveled the civilizations they conquered:

"The impact of the Mongol conquests can hardly be overestimated, although the swift arc of their ascendancy spanned only a hundred years. ... Temujin, the remarkable man who became Genghis Khan, ... stoked up the central Mongol belief that they were born to rule the world and led his people off on a conquest that ultimately stretched from the East China Sea to the Mediterranean. ...

"Part of Genghis Khan's strategy was calculated massacre: if a city resisted his armies, once it fell to him -- and they always fell -- he had all the inhabitants slaughtered. The chroniclers' reports of the numbers of dead are staggering; 1,600,000 at Harat in 1220. Rumor reached the Mongol prince Tuli that some had survived there by hiding among the piled corpses, and when he took Nishapur, some time later, he ordered the heads cut off all the bodies. At Nishapur, according to contemporaries, 1,747,000 died.

"The figures are ghastly, unbelievable. What they convey is the contemporary sense of utter destruction. Even when a city surrendered, it was looted and destroyed. After Bukhara yielded, the people were ordered out of the city so that it could be sacked, the young men and women and children were carried off into slavery, the site was leveled 'like a plain.' ...

"Why were they so unstoppable? In fact the Mongol army looks strikingly like a modern army, set down in a medieval world. Their strengths were speed and maneuverability, firepower, discipline, and an excellent officer corps. The armies of the great Khan were organized by tens, hundreds, thousands, and tens of thousands, each segment with its officers, who were chosen not according to favor or birth but proven ability. ...

"The Mongol horseman was born into a life of war. When he wasn't fighting, he was hunting, which exercised his fighting skills. From babyhood he rode; he could travel scores of miles in a day, stop, and camp on the ground and eat a handful of meat he had brought with him and get up at dawn and go another forty miles, day after day, in snow and desert heat and wind and rain, fighting all the way. He drove three or four extra horses along with him as he rode, and could change mounts without breaking out of a gallop.

"Enemy armies consistently overestimated the numbers of the Mongol forces, because for every man, there were four or five additional horses. Occasionally, the Mongols helped them along in this mistake by tying dummies onto the extra horses. The Mongol soldier carried a double recurve bow of laminated horn, with a pull of 160 pounds, which dispatched arrows accurately up to a distance of 300 meters as fast as he could pull them out of his quiver. He wore no heavy clumsy armor, but padded leather to skid aside arrows, and silk underwear to keep wounds clean. He seldom closed with an enemy hand to hand; he died at a much lower rate than the opposition.

"Above all, he obeyed orders. The battles of medieval Europe were mostly confused melees studded with individual combats; a good general was somebody who managed to get the bulk of his available forces to the battlefield before the fighting was over. [The Mongol general] Sabotai coordinated the movements of tens of thousands of men, across mountain ranges and in unknown territory, as precisely as movements on a chessboard. In battle, through a signaling system of colored banners, he could advance thousands of men at a time, send them back, turn them, and direct their charges -- and when he gave orders, his men did instantly what they were told. Not for centuries would there be another army as efficient and efficacious at the gruesome business of leveling other people's societies. 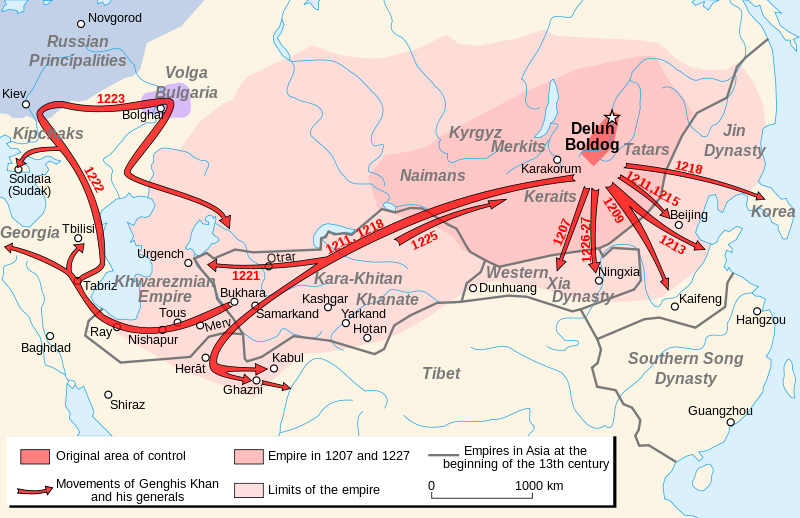 "Level them they did. China's population declined by more than 30 percent during the years of the Mongol conquest. Khwarezm and Persia were crisscrossed with an elaborate underground irrigation system that since antiquity had sustained a thriving culture; the Mongols destroyed them. Arabic scholars contend that the region's economy has yet to recover fully from this devastation.

"The wars of the khans in Iraq and Syria went on for sixty years and reduced a vigorous civilization almost to ruins. The caliph of Baghdad, Islam's supreme authority, defied the khan, which meant he had to die. The Mongol general had the caliph tied into a leather sack and trampled to paste by horses -- a sign of respect, actually, since, symbolically anyway, it avoided the shedding of his blood. The caliphate has never been restored."