In today's selection -- for Europeans in 1000 A.D., the month of July was the most difficult month, and people could starve at the balmiest time of the year:

"July was hay month in the year 1000. It was the first great harvest of the year, a time of worry about the weather and the need to get the grass cut and dried before the rain could spoil it -- and all to feed the animals, since the midsummer harvest produced no food for humans. Hay was fodder to keep the livestock going through the winter. So when the arduous work of haymaking was done, the medieval cultivator found himself facing another stretch that was harder still -- the toughest month of the entire year, in fact, since the spring crops had not yet matured. The barns were at their lowest point and the grain bins could well be empty. Tantalizingly, on the very eve of the August harvest, people could find themselves starving in the balmiest month of all. July was the time of another phenomenon quite unknown to us in the modern West -- 'the hungry gap.'

"In Piers Plowman, the late medieval fable of the land, we read how July was the month when the divide between rich and poor became most apparent. The rich could survive on the contents of their barns, and they had the money to pay the higher prices commanded by the dwindling stocks of food. Grain and bread prices could soar to exorbitant levels. But this scarcity made July the month when the poor learned the true meaning of poverty. As Piers sleeps in the fable, Patience comes to him in a dream, showing him how the poor suffer as they try to survive through their annual midsummer purgatory, grinding up the coarsest of wheat bran, and even old, shrivelled peas and beans to make some sort of bread. 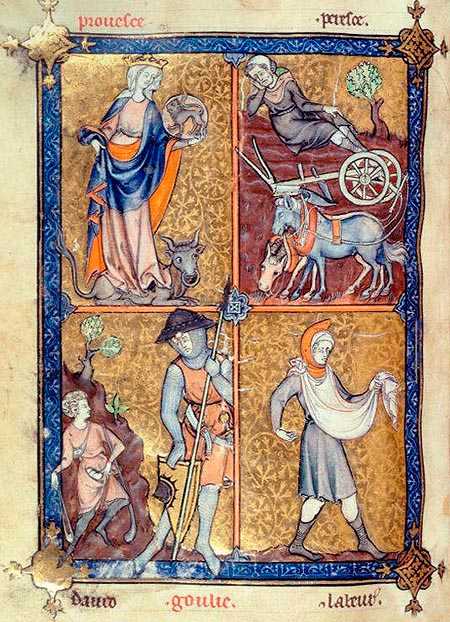 "Midsummer was also the season when that other sardonic observer of peasant life, the Flemish artist Pieter Breughel the Elder, painted his famous tableaux of crazed rural festivals. At the very end of the Middle Ages, Breughel depicted countryfolk wrapped up in fits of mass hysteria, and the historical accounts of these rural frenzies have explained the delirium in terms of the slender diet on which the poor had to subsist during the hungry gap. People were light-headed through lack of solid food, and modern chemistry has shown how the ergot that flowered on rye as it grew moldy was a source of lysergic acid -- LSD, the cult drug of the 1960s.

"This hallucinogenic lift was accentuated by the hedgerow herbs and grains with which the dwindling stocks of conventional flour were amplified as the summer wore on. Poppies, hemp, and darnel were scavenged, dried, and ground up to produce a medieval hash brownie known as 'crazy bread.' So even as the poor endured hunger, it is possible that their diet provided them with some exotic and artificial paradises. 'It was as if a spell had been placed on entire communities;' according to one modern historian."