delanceyplace.com 11/21/13 - the boldness of igor stravinsky

In today's encore excerpt - the most famous scandal in the history of classical music was the premiere of Igor Stravinsky's Rite of Spring (Le Sacre du printemps). The boldness of Stravinsky's work stood in intriguing juxtaposition against the fastidiousness of his work habits:

"All the excitement [of Igor Stravinsky's early career] was nothing against the impact of Le Sacre du printemps, which had its premiere on May 29, 1913 [when he was thirty]. Stravinsky had conceived the idea for it while working on Firebird. 'I dreamed of a scene of pagan ritual in which a chosen sacrificial virgin danced herself to death.' Work on Le Sacre was dropped for Petrushka, but Stravinsky soon resumed work on the new ballet. (He has said that The Coronation of Spring would be closer to his original meaning than the usual translation, The Rite of Spring.) Vaslav Nijinsky was the choreographer, and the premiere resulted in the most famous scandale in the history of music. Hardly anybody in the audience was prepared for a score of such dissonance and ferocity, such complexity and such rhythmic oddity. 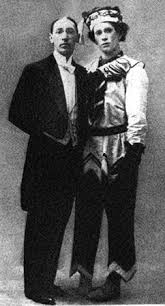 "Nobody connected with the produc­tion had the faintest idea that the music would provoke a visceral reaction. As soon as the bassoon ended its phrase in the high register, at the very opening of the ballet, laughter broke out. Soon there were whistles and catcalls. Nobody could hear the music. Diaghilev had the electricians switch the house lights off and on, in an effort to restore order. Nijinsky, in the wings, yelled the rhythms to the dancers. The Comtesse de Pourtales stood in her box, brandishing her fan, and shouted: 'This is the first time in sixty years that anybody has dared make fun of me.' People hurled insults at each other. The Apaches, [a musical school of thought] headed by Ravel, shrieked their praise. Stravinsky himself, in his Expositions and Developments, has described the famous evening at the Theatre des Champs-Elysees:

"Mild protests against the music could be heard from the very beginning of the performance. Then, when the curtain opened ... the storm broke. Cries of 'Ta gueule' (shut up!) came from behind me. I heard Florent Schmitt shout 'Taisez-vouz garces du seizieme' (be quiet, bitches of the sixteenth!); the 'garces' of the sixteenth arondissement were, of course, the most elegant ladies in Paris. The uproar continued, however, and a few minutes later I left the hall in a rage; I was sitting on the right near the orchestra, and I remember slamming the door. I have never again been that angry. The music was familiar to me; I loved it, and I could not understand why people who had not yet heard it wanted to protest in advance. I arrived in a fury backstage, where I saw Diaghilev flicking the house lights in a last effort to quiet the hall. For the rest of the performance I stood in the wings behind Nijinsky holding the tails of his frac while he stood on a chair shouting numbers to the dancers like a coxswain.

"[Yet] everything about Stravinsky pointed to an intellectual tidiness, and that included his work habits. Those were tidy to the point of compulsion. In 1916, the Swiss writer C. F. Ramuz, who was working with Stravinsky on L'Histoire du soldat, looked at Stravinsky's work table and marveled:

"Stravinsky's scores are magnificent. He is above all (in all matters and in every sense of the word) a calligrapher. . . . His writing desk resembled a surgeon's instru­ment case. Bottles of different colored inks in their ordered hierarchy each had a separate part to play in the ordering of his art. Near at hand were india-rubbers of various kinds and shapes, and all sorts of glittering steel implements: rulers, erasers, pen-knives, and a roulette instrument for drawing staves, invented by Stravinsky himself. One was reminded of the definition of St. Thomas: beauty is the splendor of order. All the large pages of the score were filled with writing in different colored inks—blue, green, red, two kinds of black (ordinary and Chinese), each having its purpose, its meaning, its special use: one for the notes, another the text, a third the translation; one for titles, another for the musical directions. Meanwhile the bar lines were ruled, and the mistakes carefully erased."