In today's encore selection - from Fire and Rain: The Beatles, Simon and Garfunkel, James Taylor, CSNY, and the Lost Story of 1970 by David Browne. In 1970, Crosby, Stills, Nash, and Young, known for their reflective music and tight harmonies, released a chart-topping, era-defining album titled Deja Vu, which included such hits as "Teach Your Children," "Our House" and "Woodstock." The success of the album belied the fact that the album was made in disharmony, chaos and unhappiness. Most of the songs were cut without the whole group present, while band members vied for creative control and to have more of their songs on the album. Moments included Graham Nash breaking down in tears, Neil Young's "night vision" monkeys running loose in his hotel room, and the group dubbing themselves the Frozen Noses:

"In the fall and early winter of 1969, work shifted from Los Angeles to San Francisco for the making of [Crosby, Stills, Nash, and Young's] first album as a quartet. On paper, the scenario looked promising. They'd be cutting tracks at Wally Heider's studio, favored by their friends in the Grateful Dead and Jefferson Airplane. Crosby had already relocated to the Bay Area, and Stills, Nash, and Young would be living a fiveminute walk away at the Caravan Lodge Motel in the seamy Tenderloin district. Each arrived with a satchel of new or half-completed songs. 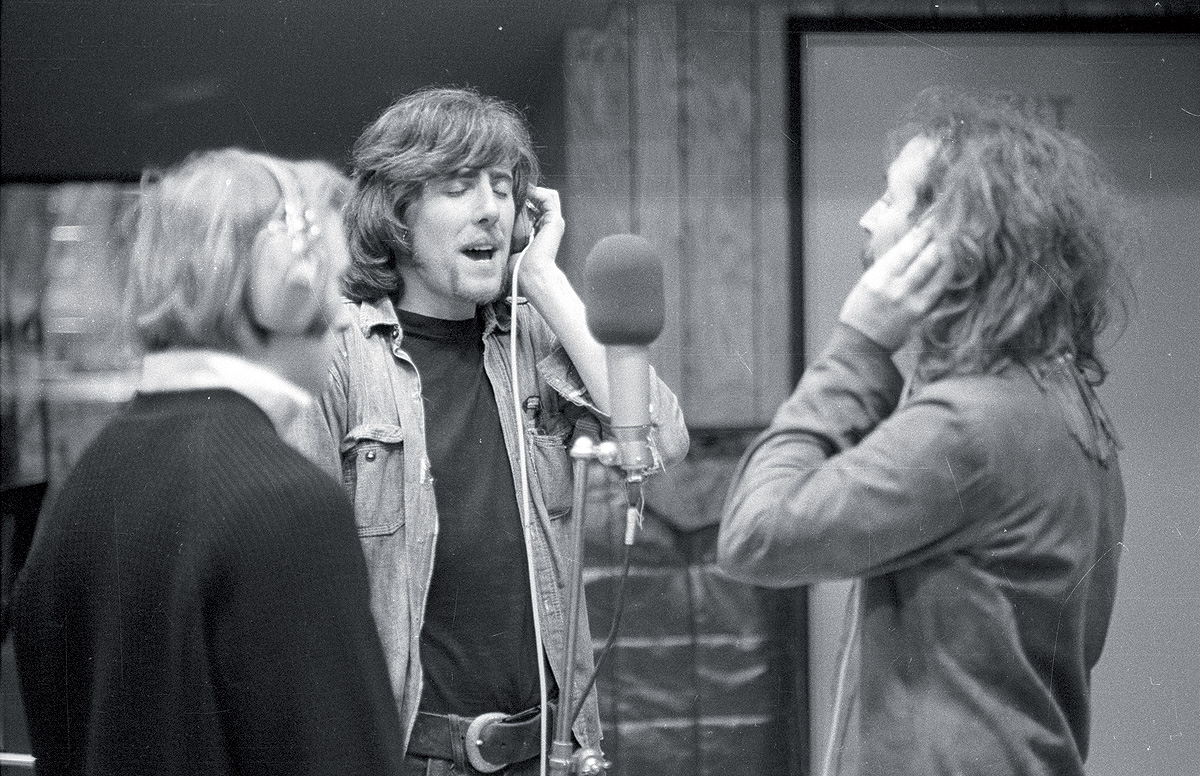 "On the first album, Stills had been very much in charge, playing most of the guitars and all the bass and organ and shaping the textures and contours of the music. Sometimes the only ones in the studio with him were Dallas Taylor and engineer Bill Halverson. Barely a year later, their lives had taken so many different turns it was sometimes hard to think straight. Stills was no longer the dominant force in the band. After Young had joined, CSNY had also added a bass player, Greg Reeves, a sixteen year-old recommended by Young's friend Rick James. (Young and James had, strangely enough, played together in the short-lived Mynah Birds in Detroit.) 'Stephen had previously done whatever he wanted,' said Ron Stone. 'All of a sudden, Stephen's space was invaded.' Stills grew frustrated when his bandmates began writing songs in the studio, wasting time and money. 'Deja vu was very miserable,' Stills recalled. 'It was bedlam, everybody doing whatever they wanted.'

"Young's formidable gifts -- the Canadian high-lonesome spookiness in his voice, the penetrating sting of his electric guitar leads, and the unassuming poetic flow of his lyrics -- were clear, but so were his aloofness and inability to commit to the others. Young first cut 'Helpless' with Crazy Horse, the band he was now working with on his own music, but when it didn't sound right, he tried it again, with Crosby, Stills & Nash. This time, thanks to Crosby-arranged harmonies that rose behind Young from a muted murmur to a vocal blanket, it clicked. Other times, like on the near-symphonic three-part suite 'Country Girl,' he worked on his own terms, venturing by himself to a studio in Los Angeles to overdub a massive pipe organ. 'Neil pretty much did his stuff on his own and brought it finished to us and said, 'You want to put some vocals on this?' ' Crosby recalled. To Nash's annoyance, Young didn't play on his two contributions, 'Our House' and 'Teach Your Children' -- songs Nash was confident would be the hit singles the group would need to continue. 'I knew what a hit was,' Nash recalled. 'We wanted to sell this bloody thing. Neil was being a little weird and selfish.' (Young also had a pair of bush babies -- tiny, nightvision monkeys -- running around his hotel room, which enhanced the craziness.)

"Given the limitations of the twenty-minutes-a-side LP format, they'd be lucky to land two songs apiece on the album, so they argued over who placed more material (and received more royalties) on the record. 'Everyone was powerless watching this freight train of resentment and anger and 'I want more of my songs on the record,' [Dallas] Taylor said. 'The whole vibe from the first album was gone.' Among the casualties -- songs recorded or attempted -- were Young's 'Sea of Madness' and a multitude of Stills numbers. Whenever they seemed to be on a roll, someone from management would come by the studio with a contract to sign, leading to someone or another in the band being unhappy and the mood being wrecked for days. To everyone's surprise, the normally reserved Nash broke down in tears one night at the studio. They had something special, he told them, but they were messing it up, bad. 'We were in a different space,' Nash recalled. 'The bloom had gone off the rose. We'd been together for a while and the novelty had worn off a little.'

"Drugs, never in short supply to begin with since the days they'd jokingly dubbed themselves the Frozen Noses, were omnipresent. ...

"Nash himself wasn't immune to pickiness. He was so unhappy with the last note on 'Our House' that Halverson had to fly down to L.A. and find a Steinway piano to re-record that one concluding, sustained piano note. 'They were second-guessing themselves,' Halverson said. 'They had so much to live up to. It was, 'Now what do we do?' ... The most important year of their careers had just begun, and already they were weary of one another."