"If, in the year 1411, you had been able to circumnavigate the globe, you would probably have been most impressed by the quality of life in Oriental civilizations. The Forbidden City was under construction in Ming Beijing, while work had begun on reopening and improving the Grand Canal; in the Near East, the Ottomans were closing in on Constantinople, which they would finally capture in 1453. The Byzantine Empire was breathing its last. The death of the warlord Timur (Tamerlane) in 1405 had removed the recurrent threat of murderous invading hordes from Central Asia -- the antithesis of civilization. For the Yongle Emperor in China and the Ottoman Sultan Murad II, the future was bright. 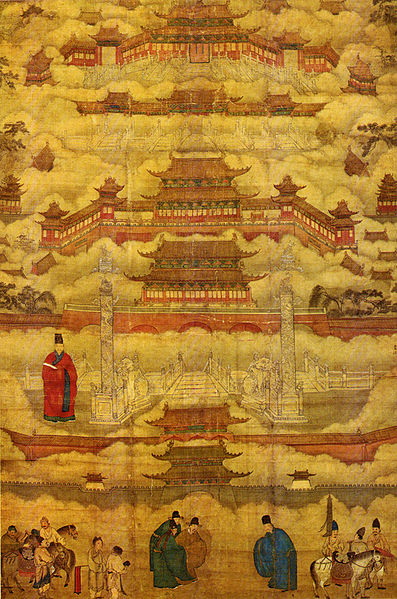 "By contrast, Western Europe in 1411 would have struck you as a miserable backwater, recuperating from the ravages of the Black Death -- which had reduced population by as much as half as it swept eastwards between 1347 and 1351 -- and still plagued by bad sanitation and seemingly incessant war. In England the leper king Henry IV was on the throne, having successfully overthrown and murdered the ill-starred Richard II. France was in the grip of internecine warfare between the followers of the Duke of Burgundy and those of the assassinated Duke of Orleans. The Anglo-French Hundred Years' War was just about to resume. The other quarrelsome kingdoms of Western Europe -- Aragon, Castile, Navarre, Portugal and Scotland -- would have seemed little better. A Muslim still ruled in Granada. The Scottish King, James I, was a prisoner in England, having been captured by English pirates. The most prosperous parts of Europe were in fact the North Italian city-states: Florence, Genoa, Pisa, Siena and Venice. As for fifteenth-century North America, it was an anarchic wilderness compared with the realms of the Aztecs, Mayas and Incas in Central and South America, with their towering temples and skyscraping roads. By the end of your world tour, the notion that the West might come to dominate the Rest for most of the next half-millennium would have come to seem wildly fanciful.

"And yet it happened.

"For some reason, beginning in the late fifteenth century, the little states of Western Europe, with their bastardized linguistic borrowings from Latin (and a little Greek), their religion derived from the teachings of a Jew from Nazareth and their intellectual debts to Oriental mathematics, astronomy and technology, produced a civilization capable not only of conquering the great Oriental empires and subjugating Africa, the Americas and Australasia, but also of converting peoples all over the world to the Western way of life -- a conversion achieved ultimately more by the word than by the sword. ...

"No previous civilization had ever achieved such dominance as the West achieved over the Rest. In 1500 the future imperial powers of Europe accounted for about 10 per cent of the world's land surface and at most 16 per cent of its population. By 1913, eleven Western empires* controlled nearly three-fifths of all territory and population and more than three-quarters (a staggering 79 per cent) of global economic output. Average life expectancy in England was nearly twice what it was in India. Higher living standards in the West were also reflected in a better diet, even for agricultural laborers, and taller stature, even for ordinary soldiers and convicts. Civilization, as we have seen, is about cities. By this measure, too, the West had come out on top. In 1500, as far as we can work out, the biggest city in the world was Beijing, with a population of between 600,000 and 700,000. Of the ten largest cities in the world by that time only one -- Paris -- was European, and its population numbered fewer than 200,000. London had perhaps 50,000 inhabitants. Urbanization rates were also higher in North Africa and South America than in Europe. Yet by 1900 there had been an astonishing reversal. Only one of the world's ten largest cities at that time was Asian and that was Tokyo. With a population of around 6.5 million, London was the global megalopolis. Nor did Western dominance end with the decline and fall of the European empires. The rise of the United States saw the gap between West and East widen still further. By 1990 the average American was seventy-three times richer than the average Chinese."

*The eleven were Austria, Belgium, France, Germany, Italy, Netherlands, Portugal, Spain, Russia, the United Kingdom and the United States. Of these only France, Portugal and Spain existed in 1500 in anything resembling their early twentieth-century form.