In today's selection -- from Finding Florida by T.D. Allman. Spain was the owner of the vast Louisiana territory in 1800, but then the Spanish king traded it to Napoleon in exchange for a small kingdom in Italy for his kinsman, the Duke of Parma. At first, Napoleon had visions of using it to restore France's empire in the Americas, but then quickly decided to sell it: he needed the cash and his possessions in the New World were proving to be a headache -- in fact he had just suffered a humiliating slave revolt in Haiti. It so happened that at the same time, President Thomas Jefferson had instructed his representatives in Europe to try and buy Florida and perhaps New Orleans in order to gain access to the Gulf of Mexico. Much to Jefferson's surprise, he ended up being offered the Louisiana territory instead:

"[In] 1800, ... Napoleon Bonaparte struck a secret deal with Spain for the return of the Louisiana territory to France. In the Third Treaty of Ildefonso the Bourbon king of Spain, Carlos IV, agreed that France would 'be again placed in possession of the colony of Louisiana.' In exchange, Napoleon promised to create a new Bourbon kingdom in Italy. ...

"Ambition ruled Napoleon; vanity ruled the Bourbons. The Spanish king's Bourbon kinsman in Italy, the Duke of Parma, bore the title 'royal highness' but had no kingdom to go with his title. The Treaty of Ildefonso set out to alleviate that distressing condition. Its express purpose was 'the Aggrandizement of His Royal Highness the Infant Duke of Parma in Italy' into full-scale kingship. It was left to Napoleon to get the duke his kingdom, a service he was in an excellent position to provide: French revolutionary armies had recently invaded Italy. The Spanish king didn't care particularly what lands comprised the new kingdom. It could 'consist of Tuscany,' or if Napoleon preferred, 'it may consist of the three Roman legations or of any other continental provinces of Italy which form a rounded state.' It was naked cynicism on a global scale. Give me the Duomo in Florence, or the Leaning Tower of Pisa if you prefer. I'll give you the alligator-infested bayous and bison-thronged prairies of North America. In such a manner were the fates of the Sioux and the Tuscans conjoined, as a phantom empire in America was exchanged for a fool's-gold kingdom in Europe. ...

"The prospect that France once again was going to establish itself in North America sent Jefferson's special envoy. James Monroe, speeding the other way across the Atlantic, to Europe. Florida, not Louisiana, was the focus of their attention. In order to secure an outlet to the Gulf of Mexico while avoiding a confrontation with France, President Jefferson had ordered the American representative in Paris, Robert Livingston, to explore the possibility of purchasing all or part of Spanish Florida, and perhaps the port of New Orleans as well. To that end, the president authorized Monroe to spend up to $10 million in order to 'effectually secure our right & interest in the Mississippi, and in the country eastward of that.'

"The country eastward of that! Never before, never again would an American diplomatic démarche produce such an opposite, gargantuan and happy result. Jefferson was thinking of Florida, not Louisiana, but when Monroe got to Paris, he discovered that the whole Louisiana territory westward of the Mississippi was up for grabs. From his expedition into Egypt, in 1798, until his retreat from Moscow in 1812, Napoleon's grand enterprises traced the same trajectory, from magnificent conception to headlong retreat, and now it was happening again. Only three years earlier Napoleon had believed he could restore France's empire in the Americas when he enticed Spain to promise him Louisiana. By the time Jefferson sent Monroe to Paris, yellow fever and the world's first successful slave revolt had turned Saint Dominique -- which the black insurgents called Haiti -- into a French mass grave. With Haiti lost and Britannia once again ruling the waves, Napoleon understood Louisiana would be as indefensible as Quebec had been in 1763. Since Louisiana was untenable, 'to attempt obstinately to retain it would be folly,' he informed his government. Therefore he would give up Louisiana even before France could take possession of it. 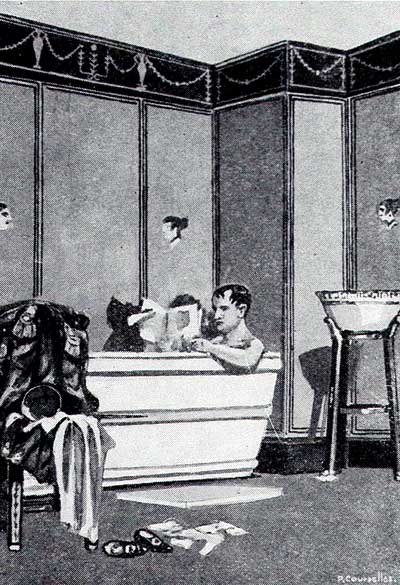 "Napoleon's foreign minister, the famously imperturbable Talleyrand, was thunderstruck; Napoleon's brothers were appalled. When Joseph and Jerome Bonaparte tried to dissuade him, Napoleon, whom they had surprised in his bath, thrashed about so violently both brothers were drenched and a servant fainted, but Napoleon would not be moved. The only way to thwart the English, and so salvage something of his American disaster, he had decided, was to make the Americans an offer they could not refuse. 'It is not only New Orleans that I cede; it is the whole colony, without reserve,' he informed Talleyrand. 'Have an interview this very day with Mr. Livingston.' Having hoped to get New Orleans and perhaps some bits of Florida east of the Mississippi, the Americans found themselves offered the whole of Louisiana west of the Mississippi, all the way to the Rocky Mountains. The Spanish, the actual occupiers of Louisiana, were not consulted."