In today's selection -- at a time of year when there are more televised games and announcers than any other, legendary basketball player Julius "Dr.J" Erving explains why he chose not to stay on long as a sports commentator shortly after he retired:

"Every famous athlete retires twice, first from the game and then from talking about the game. The familiar career for the ex-jock is to take my place behind a desk, to sit with Bob Costas, Bill Walton, Peter Vecsey, Hannah Storm, and other pundits and players and spout wisdom and platitudes about the game. It takes a certain knack, a quickness of mind, and an ability to say nothing while sounding like I am saying some­thing. I have to learn to speak while a producer is talking into my ear, giving me some statistics that I can use in support of a vacuous thesis about the first half of a basketball game that will be forgotten tomorrow.

"During the season I travel every weekend up to New York City to work at the NBC studios in Rockefeller Center, and then for the NBA finals I fly to the host cities, where I sit with Walton and Costas and Vecsey at our desk in the stands where we weigh in during halftime on how the Houston trapping defense is slowing down Penny Hardaway or Nick Anderson or how Hakeem is getting the better of Shaq down low. I find the analyses numbing. It is remarkable to me how we can fill hours, days even, of televi­sion talking about basketball, and yet I always feel that we are failing to communicate the truth of the game. ... I worry that I am not up to the task of explaining the essence of basketball as it is played at the highest levels. I feel that it is like trying to explain music through words or to describe a painting through text. You can give a feeling of the work, or compare it to something else, but you can't re-create the actual feeling of being on the court, or making that move, of imposing your will, of the precise moment that you realize you can reach the front of the rim. 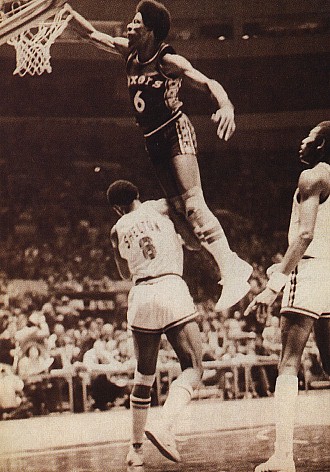 "Because it is not a moment, it is a sense, an instinct, a flicker of insight and nerve so sud­den that you have to act on it before it is a thought. What do you see? A subtle shift of weight, a lowering of the hands, a leaning forward, a glance, and that is enough to set off a chain of events. They are actions that stem from a thousand tiny in­stincts. But from where we are sitting above the court, we are unable to explain the game through these small moments, and instead talk about the Bulls' second chance scoring and the Rockets' bench production. I understand the need to do that, I have done some of that in this book, but I also know that we are simply describing a simulation of the game, rendering a three-dimensional activity in two dimensions. The truth, I think, is two men facing each other on a playground some­where, and one of them senses the other is leaning to his left, only the defender isn't actually leaning, he is trying to force the ball handler to his own left, and so on, the game spiraling upward in complexity and reaction and twitch and rise, from asphalt to high school, college gymnasiums to NBA parquet, and finally to here, where I sit behind this desk, talking about all of this as if it is nothing more than just those two kids in that school yard. ...