In today's selection -- from Franklin Pierce by Michael F. Holt. In the 1840s and 1850s, the two main parties in the United States were the Whigs and the Democrats. Abraham Lincoln was a staunch member of the Whigs, and resisted recruitment into the new and emerging Republican party -- a party that shared with the Whigs a belief in government-funded internal improvements and high tariffs to protect US industry. But unlike the Whigs, the Republicans had a strong anti-slavery stance as well. By the late 1850s, the Whigs had all but ceased to exist. They were brought down by disagreements on slavery between their Northern and Southern members, and by the emergence of a new party called the Know Nothings that emerged from nowhere but spread rapidly based on its anti-Irish, anti-Catholic platform. This was just one of many adverse reactions to immigration in our history that seem surprising today given the now-clear beneficial effects of these immigrants:

"Abraham Lincoln, to take one example, spurned overtures from residents of northern Illinois to join the new Republican Party, and he ran for the state legislature in 1854 as a straight-out Whig. ...

"Yet those Whigs met and ultimately succumbed to a different new challenger for anti-Democratic votes. This was the anti-immigrant, anti-Catholic, and antipolitician American or Know Nothing movement, which vowed to destroy both the Democratic and Whig parties. Between 1846, the year of the Irish potato famine, and 1854, more than 3 million Irish and German immigrants, the vast majority of whom were Roman Catholics, had arrived in the United States. Southern cities such as Savannah, Mobile, New Orleans, Saint Louis, and Baltimore received some of this influx, but most immigrants headed for northern cities. To this flood of immigrants, native-born Protestants, who had been warned for decades by bigoted ministers about a papal plot to undermine the American republic, attributed a number of evils -- the growth in crime, poverty, public drunkenness, and competition for jobs -- to these immigrant 'minions' of the pope. The competition for jobs became a particular grievance of native-born manual workers when the economy plunged into a recession during the last half of 1854.

"Nonetheless, it was the increased political clout of Catholic immigrants that did the most to spur the growth of Know Nothingism in 1854 and 1855. The chief political goals of the Know Nothing movement were to bar all immigrants and all Catholics, whether native-or foreign-born, from holding public office and to increase the naturalization period for immigrants from five to twenty-one years -- when, that is, the objective was not to abolish naturalization, which brought the right to vote, altogether. The election of 1852 did much to fan nativist fears. That year both the Whigs and Democrats openly courted the Catholic immigrant vote. The number of immigrants voting, almost all of them voting Democratic, soared. And in the wake of that contest, Franklin Pierce had appointed an Irish Catholic as his postmaster general in an apparently overt bid for Catholic support. In the eyes of anti-Catholic nativists, both the Democrats and the Whigs stood guilty of undermining the Protestant republic. 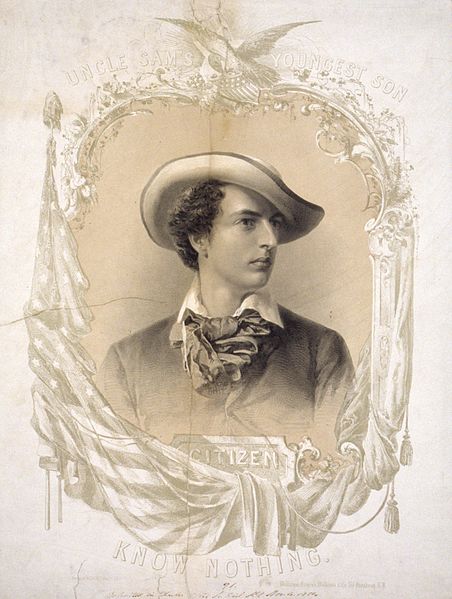 "What emerged as the Know Nothing movement actually began years before the 1852 election. In 1849 an anti-immigrant, anti-Catholic fanatic named Charles B. Allen had tried to start a secret, superpatriotic fraternity known as the Order of the Star Spangled Banner. As of mid-1852 it had a grand membership of nine men meeting in a back alley in New York City. Then it was taken over by another nativist group known as the Order of United Americans, led by a superb organizer named James W. Barker. By the end of 1854 the membership of the order totaled somewhere between eight hundred thousand and 1.5 million men, most of them skilled, semiskilled, and unskilled laborers or lower-middle-class white-collar clerks, who were sworn by membership oaths to support the political candidates endorsed by the local lodges or wigwams of the order. Membership was supposed to remain absolutely secret, and the sobriquet 'Know Nothing' came from members' professing to know nothing about the order when questioned by outsiders. At first, the Know Nothings endorsed candidates of the major parties. But then they began to nominate their own candidates, and in the fall of 1853 and spring local elections of 1854 they startled outsiders by electing men no one else knew were even seeking office."