In today's selection -- from The American West by Robert V Hine & John Mack Faracher. When John Sutter discovered gold in California in 1848, he tried to keep it a secret. But word soon got out, and it transformed America from a country inching its way West from the original colonies to a country sprinting headlong to the California coast -- and thrust it forward to the pinnacle of world economies. By the time the gold craze ended in Alaska fifty years later, the West was littered with isolated, nearly empty towns that had all briefly been filled with lonely prospectors -- outlaws and prostitutes -- smelters and slag heaps:

"'Boys, by God I believe I have found a gold mine!' James Marshall, in charge of constructing a sawmill for John Sutter, shouted those words to his workers on January 24, 1848, beginning the California gold rush. Some Americans argued that this discovery, coming just ten days before the official announcement of the treaty ending the Mexican War, was a kind of divine reparation. 'God kept that coast for a people of the Pilgrim blood,' preached a New England minister. ... 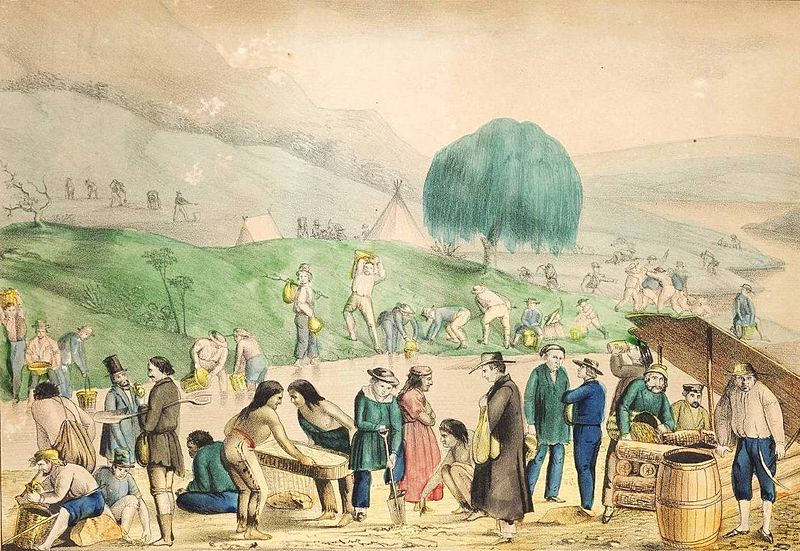 "Newly arrived Anglo-American farmers in the Sacramento valley... wanted wooden houses, and men such as Sutter built sawmills among the large pines in the foothills to meet the demand. Sawmills require waterpower, the diversion of water from stream to spillway, and it was at such a site that Marshall found those first several bits of glittering gold. Americans discovered gold in California because of their demand for lumber, not the workings of Providence.

"California is counted as the first of the great mining rushes of the nineteenth century, but the little-known Georgia gold rush of 1829 actually prefigured it. Thousands of miners clamored into the foothills of the southern Appalachians, extracting as much as ten million dollars in gold and pushing the Cherokees off their homeland. Shockingly disorderly mining towns appeared overnight. One miner wrote home of 'gambling houses, dancing houses, drinking saloons, houses of ill fame, billiard Saloons, and tenpin alleys that were open day and night.' ...

"The California experience, however, provided the lodestone for the exploitation of the Far West in the second half of the nineteenth century. Up to the 1840s the United States absorbed and incorporated new territory contiguously, but the gold rush caused the sudden movement of tens of thousands across the continent to the Pacific Coast. ... From California, prospectors spread out across the mountains and deserts, making a series of strikes that spawned a seemingly endless round of rushes: to the Fraser River in British Columbia in 1858; the Colorado Rockies west of the emerging city of Denver and the Washoe country of Nevada in 1859; Idaho and Montana in 1860 and 1862; the Black Hills of the Dakotas in 1876; Leadville, Colorado, and Tombstone, Arizona, in 1877; the Coeur d'Alene region of Idaho in 1883; and, closing out the era, the northern Yukon country of Canada in 1896-97, which quickly spread to Nome and Fairbanks, Alaska. Each rush created new isolated centers of population.

"Practically every rush also presented the familiar kaleidoscope of lonely prospectors with their mules and pans, crowds of jostling men of every conceivable nationality, jerry-built stores along muddy streets, mirrored saloons, prostitutes and dance hall girls, outlaws, claim jumpers, and vigilance committees -- all soon supplanted by smelters and mills, slag heaps and underground burrows, company towns, and labor unions, leading finally to strikes with the fist instead of the shovel. Mining added a significant dimension to the social, economic, and imaginative development of the West.

"John Sutter tried to keep the discovery of gold at his millrace quiet. 'I had a talk with my employed people all at the Sawmill,' he later remembered, and asked 'that they would do me the great favor and keep it a secret.' A vain hope. Yet Sutter succeeded in slowing the spread of the news. Reports did not reach San Francisco until May. The California Star denounced them as 'a sham, a superb take-in as was ever got up to guzzle the gullible,' but within days the town was emptied of able-bodied men. The cry of gold quickly spread throughout the territory. One man described the effect of the news: 'A frenzy seized my soul. Piles of gold rose up before me at every step; castles of marble, dazzling the eye with their rich appliances; thousands of slaves, bowing to my beck and call; myriads of fair virgins contending with each other for my love, were among the fancies of my fevered imagination. The Rothschilds, Girards, and Astors appeared to me but poor people. In short, I had a very violent attack of Gold Fever.' Editors suspended publication of their newspapers and city councils adjourned for months. Americans, Mexicans, and Indians alike poured into the foothills with picks, shovels, and pans."