Today's selection -- from The Boys in the Boat by Daniel James. In 1933, American teenagers -- at least those lucky enough to have escaped the maws of the Depression and embark on a path to college -- smoked cigarettes and pipes for their health, watched King Kong, wore cardigan sweaters and tried to stave off worries of their own fragile futures:

"It was the fourth year of the Great Depression. One in four working Americans -- ten million people -- had no job and no prospects of finding one, and only a quarter of them were receiving any kind of relief. Industrial production had fallen by half in those four years. At least one million, and perhaps as many as two million, were homeless, living on the streets or in shantytowns. ... In many American towns, it was im­possible to find a bank whose doors weren't permanently shuttered; behind those doors the savings of countless American families had disappeared for­ever. ...

"In March an oddly appro­priate movie had come out and quickly become a smash hit: King Kong. Long lines formed in front of movie theaters around the country, people of all ages shelling out precious quarters and dimes to see the story of a huge, irrational beast that had invaded the civilized world, taken its inhabitants into its clutches, and left them dangling over the abyss. ...

"[In 1933], dozens of ... American newspapers had run a single-frame, half-page cartoon. Dark, drawn in charcoal, chiaroscuro in style, it depicted a man in a derby sitting dejectedly on a sidewalk by his candy stand with his wife, behind him, dressed in rags and his son, beside him, holding some newspapers. The caption read 'Ah don't give up, Pop. Maybe ya didn't make a sale all week, but it ain't as if I didn't have my paper route.' But it was the expression on the man's face that was most arresting. Haunted, haggard, somewhere beyond hopeless, it sug­gested starkly that he no longer believed in himself. For many of the millions of Americans who read the American Weekly every Sunday, it was an all too familiar expression -- one they saw every morning when they glanced in the mirror. 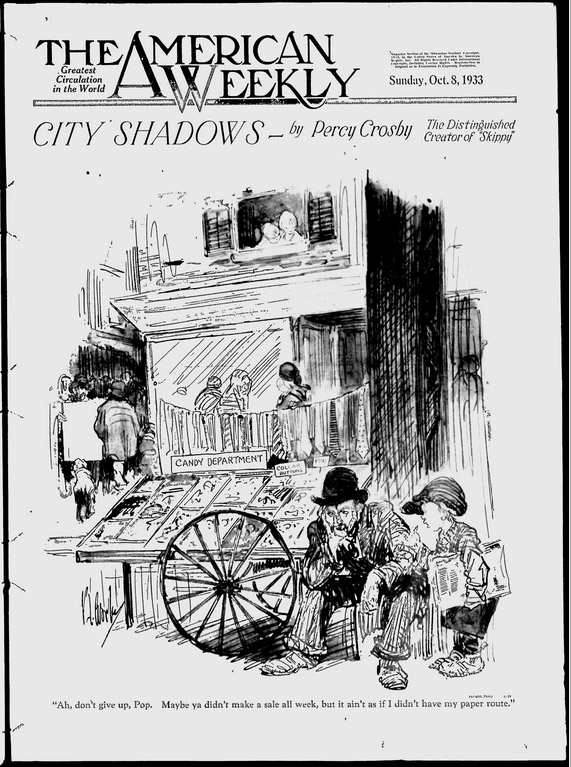 "The men wore pressed slacks and freshly shined oxfords and cardigan sweaters. As they ate, they talked earnestly about classes, about the big upcoming foot­ball game ... and about the improbable ending of the World Series two days before, when little Mel Ott had come to the plate for the New York Giants with two out in the tenth inning. ... Some of the young men sucked lazily on briar pipes, and the sweet smell of Prince Albert tobacco smoke drifted among them. Others dangled cigarettes from their lips, and as they paged through the day's [newspaper] they could take satisfaction in a half-page ad that trumpeted the latest proof of the health benefits of smoking: '21 of 23 Giants World's Champions Smoke Camels. It Takes Healthy Nerves to Win the World Series.'

"The young women, sitting in their own clusters on the lawn, wore short-heeled pumps and rayon hose, calf-length skirts, and loose-fitting blouses with ruffles and flounces on the sleeves and at the necklines. Their hair was sculpted into a wide variety of shapes and styles. Like the young men, the women talked about classes and sometimes about baseball too. Those who had had dates over the weekend talked about the new movies in town -- Gary Cooper in One Sunday Afternoon, at the Paramount, and a Frank Capra film, Lady for a Day, at the Roxy. Like the boys, some of them smoked cigarettes."