Today's selection -- from Haiti After the Earthquake by Paul Farmer. Haiti is the poorest country in the Western hemisphere, and one of the poorest in the world. Haiti was part of one of the largest expansions of slavery in world history -- the explosion of slavery in the Caribbean in the 1600s and 1700s to support the new European craving for sugar. And harvesting and refining sugar was one of the deadliest and most backbreaking occupations in the New World -- perhaps topped only by the silver mining done deep within the earth in places like Potosi, Bolivia. It was the revolt of Haiti slaves against their French masters (1791-1804) that helped persuade Napoleon to sell Louisiana to the United States:

"Haiti was founded by a righteous revolution in 1804 and became the first black republic. It was the first country to break the chains of slavery, the first to force Emperor Napoleon to retreat, and the only to aid Simon Bolivar in his struggle to liberate the indigenous people and slaves of Latin America from their colonial oppressors. Tragically, this history of liberty and self determination has drawn two centuries of political and economic ire from powerful countries resulting in policies which have served to impoverish the people of Haiti.

"Feared by Thomas Jefferson for their successful uprising; extorted by France in 1825 for 150 million francs to compensate the loss of the Empire's 'property' -- both slaves and land -- (a debt the Haitian people completed paying, with interest, more than a century later); occupied by the U.S. military between 1915 and 1934 to stifle European influence in the Western Hemisphere; and disrespected in their quest for democracy by an unrelenting series of dictators and coup d' etats backed by Western countries: the free people of Haiti have been continually re-shackled politically and economically.

"In the wake of the January 12, 2010, earthquake ... amidst the rubble of the houses, buildings and schools and in front of the once grand National Palace stands Neg Mawon -- the symbol of Haiti. Neg Mawon at once embodies the marooned man, the runaway slave, and the free man. He symbolizes the complex history of the Haitian people: stolen from Africa, marooned on an island and liberated through a brave and radical revolution. Shackles broken, machete in hand, the free man does not hide; rather he blows a conch to gather others to fight for the freedom and dignity of all people. ... Neg Mawon is the indefatigable spirit of Haiti's people, a people profoundly and proudly woven to their history. 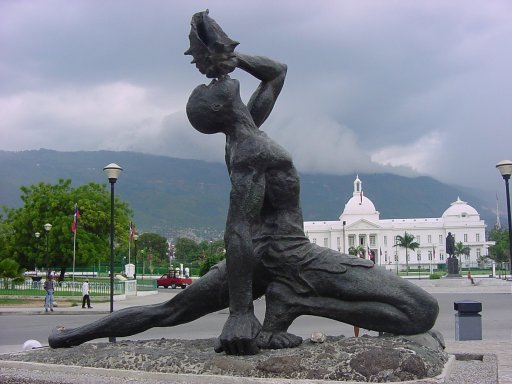 "When I arrived in Haiti on Thursday January 14, 2010, I asked my friend who was driving, 'Kote Neg Mawon' -- where is the free man? 'Li la' he said -- he is here. And as we rounded the corner behind Champs Mars, the plaza in front of the devastated palace where thousands had already made their homes -- and remain today -- there, rising from the dust of the still trembling earth, stood the statue of Neg Mawon. I was drawn by the image out of the car and as I stood, weeping, an old woman put her arm around me, she too was crying. I said, 'Neg Mawon toujou kanpell' -- the free man is still standing!! And she replied, powerfully, 'Cheri, Neg Mawon pap jamn kraze' my dear, the free man will never be broken. ..."