Today's selection -- from Young Stalin by Simon Sebag Montefiore. In 1900, Baku, a small town on the western edge of the Caspian sea produced half the world's oil. Its inhabitants included the Nobel brothers, later of Nobel prize fame, and the Rothschilds. The town boasted garish displays of wealth never before seen, but it was so poisoned with oil that the life expectancy of its residents was only thirty:

"Baku was a city of 'debauchery, despotism and extravagance,' and a twilight zone of 'smoke and gloom.' Its own governor called it 'the most dangerous place in Russia.' For Stalin, it was the 'Oil Kingdom.'

"Baku was created by one dynasty. Swedish by origin, Russian by opportunity and international by instinct, the Nobels made their first fortune selling land mines to Tsar Nicholas I, but in 1879, the year of Baku's first 'fountain' of oil, the brothers Ludwig and Robert Nobel founded the Nobel Brothers Oil Company in the town known mainly for the ancient Zoroastrian temple where Magi priests tended their holy oil-fuelled flames. The drilling had already started; entrepreneurs struck oil in spectacular gushers.

"The Nobels started to buy up land particularly in what became the Black City. Another brother, Alfred, invented dynamite, but Ludwig's invention of the oil tanker was almost as important. The French Rothschilds followed the Nobels into Baku. By the 1880s, Baron Alphonse de Rothschild's Caspian Black Sea Oil Company was the second biggest producer -- and its workers lived in the industrial township called the White City. By 1901, Baku produced half the world's oil -- and the Nobel Prize, established that year, was funded on its profits.

"Its oil boom, like the Kimberley Diamond Fever or the California Gold Rush, turned peasants into millionaires overnight. A dusty, windy ex-Persian town, built on the edge of the Caspian around the walls and winding streets of a medieval fortress, was transformed into one of the most famous cities in the world.

"Its 'barbaric luxury' filled the newspapers of Europe, scintillated by instant riches, remarkable philanthropy and preposterous vulgarity. Every oil baron had to have a palace, many as big as a city block. Even the Rothschilds built one. The Nobels' palace was called Villa Petrolea, and was surrounded by a lush park. One oil baron insisted on building his palace out of gold but had to agree to cover it with goldplate because the gold would melt; another built his mansion like the body of a giant dragon with the entrance through its jaws; a third created his vast palace in the shape of a pack of cards emblazoned in golden letters: 'Here live I, IsaBey of Gandji.' A popular singer made his fortune when a performance was rewarded by some land on which oil was struck: his neo-classical palace is now the headquarters of Azerbaijan's state oil company. 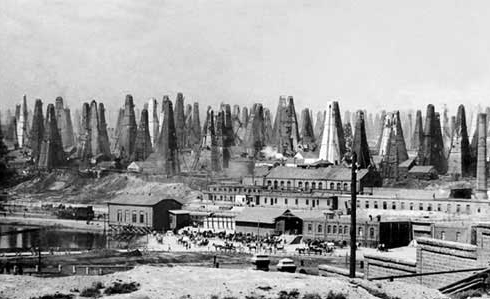 Oil wells in a Baku suburb circa 1900

"Yet the source of all this money, the derricks and the refineries, poisoned the city and corrupted the people. 'The oil seeped everywhere,' says Anna Alliluyeva. 'Trees couldn't grow in this poisonous atmosphere.' Sometimes it bubbled out of the sea and ignited, creating extraordinary waves of fire.

"'Equal parts Dodge City, medieval Baghdad, industrial Pittsburgh and nineteenth-century Paris,' Baku 'was too Persian to be European but much too European to be Persian.' Its police chiefs were notoriously venal; its Armenians and Azeris armed and vigilant; its plentiful gunmen, the kochis, either performed assassinations for three roubles a victim, guarded millionaires or became 'Mauserists,' gangsters always brandishing their Mausers. 'Our city,' writes Essad Bey, 'not unlike the Wild West, was teeming with bandits and robbers.' "