Today's selection -- from Tune In: The Beatles All These Years by Mark Lewisohn. When John Lennon and Paul McCartney were very young, seventeen and fifteen years old respectively, they grabbed every spare moment to play music together, and with the inspiration of Buddy Holly and the Crickets, they began to write their own songs as well:

"Afternoons were whiled away playing guitars to records, singing, reveling in the joy of chords, finding out how almost every rock song they knew could be played with C, F and G or G7. ... They toiled hours, weeks, trying to work out how Buddy Holly played the intro to 'That'll Be the Day,' before John eventually figured it out. ...

"Buddy Holly was the springboard to John and Paul's songwriting. As John later said, 'Practically every Buddy Holly song was three chords, so why not write your own?'

"Stated so matter-of-factly, it could seem that writing songs was an obvious next move, but it wasn't. Teenagers all over Britain liked Buddy Holly and rock and roll, but of that large number only a fraction picked up a guitar and tried playing it, and fewer still -- in fact hardly anyone -- used it as the inspiration to write songs themselves. John and Paul didn't know anyone else who did it, no one from school or college, no relative or friend ... and yet somehow, by nothing more than fate or fluke, they'd found each other, discovered they both wrote songs, and decided to try it together. Paul recalls the method: 'We'd sit down and say, "OK, what are we going to do?'"and we'd just start off strumming and one or the other of us would kick off some kind of idea and then we'd just develop it and bounce off each other' 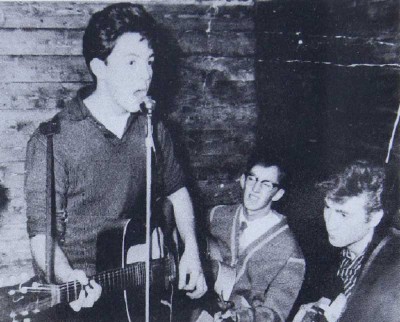 "It had taken only seconds to discover that both had strong and distinctive voices for rock -- in all its styles and tempos -- and that they sounded great together. They could blend in perfect harmony, with Paul tending to take the higher key and John holding the lower. The Crickets' influence was again strong, and so too were the crafted melodic harmonies of the Everly Brothers, whose first record, 'Bye Bye Love,' was issued in Britain the day before John met Paul, July 5, 1957. ...

[John] and Paul knew they had to keep proper track of their ideas. They'd no means of recording them and neither could read or write music, so Paul appropriated a Liverpool Institute exercise book, maybe forty-eight feint-ruled pages, in which every new song had a fresh page. In his neat left-handed script, generally using a fountain pen, he wrote the words (they were always words, never lyrics) with chords shown by their alphabetical letter. Unable to describe the melody, they decided early on that if they couldn't remember something the next day, they could hardly expect it to stick in the mind of anyone else, in which case it was 'crap' and deserved to go. But sometimes Paul wrote atmospheric directions. For one song it was 'Ooh ah, angel voices.'

"And on the top of every new page, above the song title, Paul wrote:

"The influence for this wasn't rock and roll so much as the great American songwriting teams of older generations, the likes of Rodgers and Hammerstein, Rodgers and Hart, Lerner and Loewe and other famous combinations who wrote for Hollywood and Broadway.' From the outset, John and Paul settled on Lennon-McCartney as a partnership, with that name order. Lennon came before McCartney alphabetically, and he was almost two years older, and it was his invitation, and, surpassing any other consideration, it was simply the way of things: John always came first. While equal in terms of contribution, Paul had to accept that one of them was just a little more equal than the other. Second billing wasn't in his nature, though. Paul accepted it from his fairground hero and positively no one else. 'We were really looking at being Rodgers and Hammerstein, and famous writing duos always had their name the same way. You didn't hear "Hammerstein and Rodgers," it just didn't sound as good. So we always wanted to have people say, "Oh, that's a Lennon-McCartney song." ' ...

"Competition was nonetheless an ever-essential component. John had complete admiration for Paul's facility with harmony and melody, his musicianship and invention; Paul respected John's musical talent and envied his original repartee. Yet while combining their skills as a team, they remained competitive as individuals, each trying to outdo the other. It became a vital artistic spur: John would call it 'a sibling rivalry ... a creative rivalry,' Paul spoke of 'competitiveness in that we were ricocheting our ideas.' Each tried to impress the other out of sheer fear of what he might say in return. Both were rarely less than candid, and the thought that a new song might be branded 'crap' was usually more than enough to continually raise standards."