Today's selection - from The Bohemians by Ben Taroff. In today's fast changing world, where the way movies, music, and books are distributed and sold is constantly changing, it is worth noting that it has been changing continuously throughout the last two hundred years. The books of Mark Twain (Samuel Clemons) were sold by subscription to the emerging middle class that was his most important audience. And Twain and other authors of his day were rarely able to make a living just from writing books. In fact, he made most of his money from the lecture circuit, booking the largest lecture hall in a city and then boisterously promoting and selling tickets to his lecture. Twain changed American literature. He was a voice from the West -- Missouri, Nevada and then San Francisco -- and thus had more easily escaped the cultural shadow of Europe. Although he had first gained national fame with the short story "Jim Smiley and his Jumping Frog," his first and most successful book was The Innocents Abroad, a confident expression of America's ascendance:

"The Innocents Abroad sold 82,524 copies in its first eighteen months, earning [Mark] Twain $16,504 in royalties -- or more than $217,000 in today's dollars. It would be his biggest best seller by far, the book that gave him a permanent place in the culture. Reviewers loved it. Even the [highly influential] Atlantic Monthly approved. 'There is an amount of pure human nature in the book that rarely gets into literature,' wrote the magazine's assistant editor, William Dean Howells. '[E]ven in its impudence it is charming.'

"The Atlantic's support was a bit surprising, considering the book was an attack on everything it stood for. ... The Innocents Abroad was a bullet in the heart of America's literary establishment. It began with how the book was sold. It was published by subscription, which meant that traveling salesmen went door-to-door peddling it to consumers. This was a popular way to sell cookbooks and Bibles, but no self-respecting literary writer would ever dream of distributing his work this way. The polite thing to do was to put your book on the shelf and wait for it to sell, not run into people's houses demanding they buy it.

"Subscription publishing had ancient roots -- Napoleon Bonaparte and George Washington had both worked as book canvassers -- but it flourished after the Civil War. The rapid growth of railroads enabled salesmen to travel farther and faster. Elisha Bliss's American Publishing Company belonged to this new generation of subscription houses, enlisting agents to trawl for customers throughout the country. 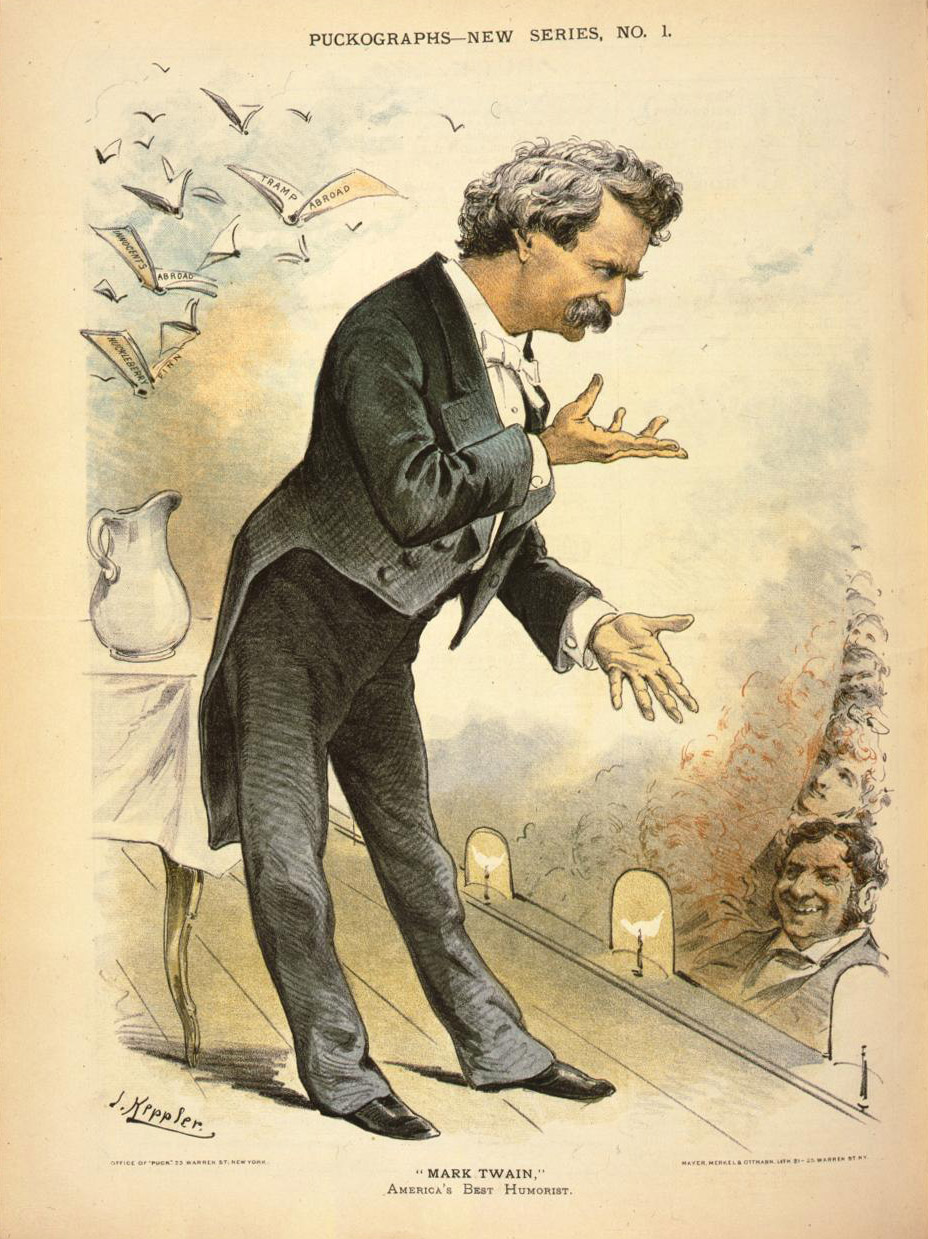 "Twain loved the model. It let someone of his unorthodox talents bypass the gatekeepers of traditional publishing, and gave him a more direct route to his core audience: the middle class. His readers were doctors, lawyers, businessmen -- the rising bourgeoisie of the new industrializing nation. They didn't care if subscription publishing lacked high-culture cachet. They wanted to satisfy their growing curiosity about the rest of the country and the world. The Quaker City sightseers [in Twain's book] came mostly from their ranks. The Innocents Abroad was their story.

"Upscale Americans had been going to Europe for decades. But in the years after the Civil War, as transatlantic travel became cheaper, a new kind of creature began crossing the ocean en masse: the Middle American. He didn't have the polish of his predecessors. He spoke atrocious French and mangled the pronunciation of foreign names. Faced with the glories of Europe, he wavered between headscratching incomprehension and enraptured reverence for things he didn't understand -- 'old connoisseurs from the wilds of New Jersey who laboriously learn the difference between a fresco and a fireplug,' as Twain put it. Worst of all, he had an insatiable need for souvenirs. In Egypt, Twain spotted a relic hunter crawling up the Sphinx, hammering a memento off its face. 'The gentle reader will never, never know what a consummate ass he can become, until he goes abroad.'

"The familiar spectacle of watching one's fellow Americans make fools of themselves in a foreign country -- Twain captured it perfectly. But parody wasn't his only point. There was pride too. Like him, these bourgeois barbarians were emissaries of a newly confident nation that had just passed through the bloodiest war in its history. America was coming of age -- and the moment was ripe for an Oedipal reckoning with its Old World roots. Twain didn't go abroad to swoon over a superior civilization. On the whole he found Europe and the Holy Land dirty, dilapidated places, trapped in the past. Even their most cherished treasures often failed to impress. Leonardo da Vinci's The Last Supper was a 'mournful wreck,' he wrote; like much else he saw on his journey, it had grown decrepit with age. The lesson of The Innocents Abroad was that Americans should stop venerating the corpses of dead cultures. Their barbarianism was infinitely preferable to the decadence of a region well past its prime. They belonged to the country of the future: an innovative, economically ascendant nation with a style all its own. ...

"The Innocents Abroad proclaimed America's liberation from the Old World, its prose suggested the form that freedom might take."