Today's encore excerpt - from Absolute Monarchs: A History of the Papacy by John Julius Norwich. In the 2000 year history of the Catholic church, there have been many pious cardinals and popes. But others were void of piety. They used their vast wealth and power to more diabolical ends. Among those were Pope Alexander VI (1431-1503) and his son, the Cardinal and Duke of Valentinois Cesare Borgia (1476-1507):

"The last four years of Alexander's pontificate were taken up largely with his and Cesare Borgia's ambition to appropriate the Papal States and to turn them into a Borgia family fief. The program was mapped out and put into execution by Cesare, who by now utterly dominated his father. It involved the crushing of many of the great Roman families, above all the Orsini; it necessitated several assassinations, which were normally followed by seizures of property; and it was further financed by the open sale of the highest offices of the Church, including that of cardinal. Ce­sare Borgia was hated and feared for his violence and cruelty. 'Every night,' the Venetian ambassador reported to his government, 'four or five men are discovered assassinated, bishops, prelates and others, so that all Rome trembles for fear of being murdered by the duke.' 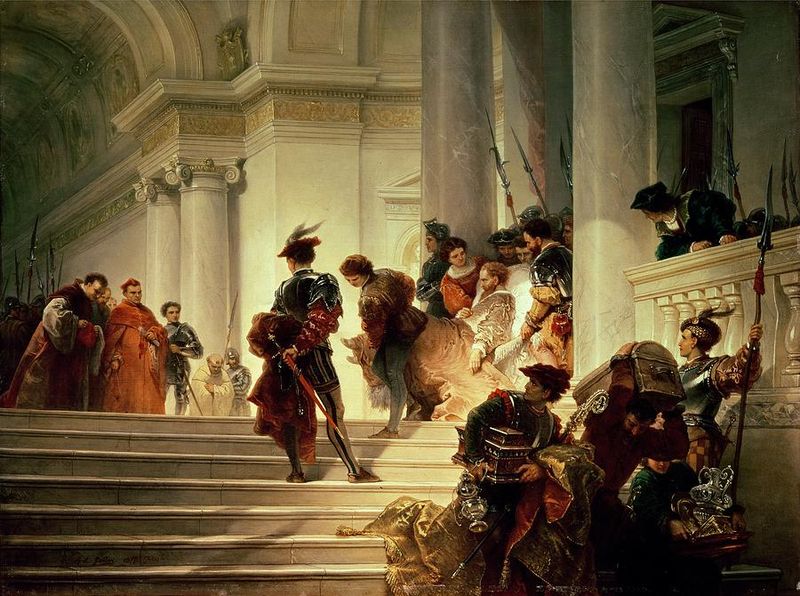 "Yet, although he was hideously disfigured by syphilis -- toward the end of his life he never showed himself in public without a mask -- few who came in contact with Cesare failed to be impressed. His energy was boundless, his courage absolute. He appeared to need no sleep, and his speed of movement was astonishing: he was said to arrive at one city be­fore he had left the last. At the same time he shared to the full his father's love of women. In his short life -- he was to die in battle in Navarre, at the age of thirty-one -- he left at least eleven bastards; and the diary of the papal master of ceremonies, Johannes Burchard, leaves us in no doubt of how he spent his leisure:

"On Sunday evening, October 30 [1501]. Don Cesare Borgia gave a supper in his apartments in the apostolic palace, with fifty decent prostitutes or courtesans in attendance, who, after the meal, danced with the servants and others there, first fully dressed and then naked. Following the supper, too, lampstands holding lighted candles were placed on the floor and chestnuts strewn about, which the prosti­tutes, naked and on their hands and knees, had to pick up as they crawled in and out among the lampstands. The Pope, Don Cesare, and Donna Lucrezia were all present to watch. Finally prizes were offered -- silken doublets, pairs of shoes, hats, and other garments --for those men who could perform the act most frequently with the prostitutes.' "