Today's selection -- from The Hotel On Place Vendôme by Tilar J. Mazzeo. In the 1890s, César Ritz and Auguste Escoffier together redefined luxury hotels and fine dining in London and Paris, and their hotels were where the elite in those cities gathered. Among their innovations were built-in closets, plumbed bathrooms, high tea and the service of dinners in courses. Not everyone approved.

"The founder, César Ritz, personally planned the layout of the Hôtel Ritz. Born the son of a Swiss peasant, César Ritz had risen through the ranks as a young man, from waiter to hotel manager and now to partner. With Auguste Escoffier, he had redefined at the Savoy in London how the wealthy thought of luxury hotels. In the spring of 1898, he was at the apex of his career, opening one new grand establishment after another.

"The Hôtel Ritz epitomized his personal philosophy of modern luxury. On the one hand, it was a palace hotel, meant to be the kind of place in which royalty might feel at home on a jaunt to Paris. The hotel famously had -- indeed, famously has -- no lobby proper. That was to prevent those who were not in residence from lurking voyeuristically in the foyer. It was part of a whole set of decisions calculated to make the palace feel private and intimate and cozy. 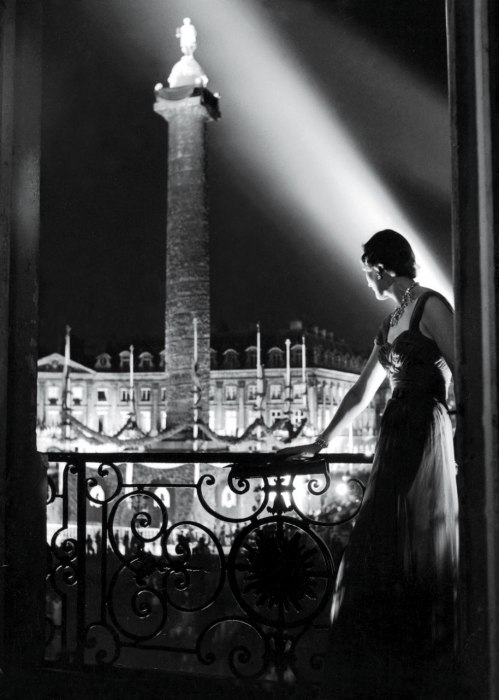 "Those admitted to its magic circle needed the chance to strut the stage, however. That was how it worked in high society, where much depended on visual cues and performance. So there was a grand staircase, from which the ladies could descend in their finery, watched by all eyes as they made their dramatic runway entrance. It was not by chance that the Hôtel Ritz was established in the heart of the new Parisian couture district at the very moment that the French were inventing modern fashion. The shops touting the great names of design and luxury were clustered around the Place Vendôme and to its west along the rue du Faubourg Saint Honoré. On the small streets that spun off the Place Vendôme, and along rue Cambon, especially, were milliners and fabric merchants and British tea shops and the ateliers of up-and-coming young designers.

"The Hôtel Ritz was a palace hotel, but there was nothing stuffy or ancestral about it, despite its aesthetic or its conveniences. To be sure, the furniture was classic and expensive, in the styles of the French kings. But all the rooms were designed to be contemporary and -- since César Ritz had a not unreasonable fear of tuberculosis and cholera spreading among his guests -- scrupulously hygienic. Heavy carpets and drapes that gathered dust and germs were anathema, and the bedrooms had newfangled innovations such as built-in closets and private, plumbed bathrooms. In tribute to his Swiss-born zeal for precision, in every room a small bronze clock on the wall kept the time exactly.

"As Oscar Wilde complained, bitterly if not entirely logically, the elevators moved too fast and each room had '[a] harsh and ugly light, enough to ruin your eyes, and not a candle or lamp for bedside reading. And who wants an immovable washing basin in one's room? I do not. Hide the thing. I prefer to ring for water when I need it.' In 1898 bathroom sinks with indoor plumbing were a novelty. In the coming years -- when war would mow down entire generations of young men and when professional careers for women became new possibilities -- only the truly rich would be able to keep household retainers to fetch their water. ...

"From the kitchens, Auguste Escoffier modernized dining in Paris. With the help of Lady de Grey, he had already popularized high tea and made it fashionable -- and accepted -- for women to dine in public in London. He intended to do the same in the French capital. Escoffier invented the modern meal as we know it, popularizing 'Russian service,' the system of serving dishes in courses. For generations before that, the French royalty had feasted on groaning buffets of elaborate dishes. And, for fine restaurant dining, Escoffier invented the prix fixe menu."