Today's selection -- from On the Run by Alice Goffman. The high rates of imprisonment in the United States.

"The number of people imprisoned in the United States remained fairly stable for most of the twentieth century, at about one person for every thousand in the population. In the 1970s this rate began to rise, and continued a steep upward climb for the next thirty years. By the 2000s, the number of people behind bars stood at a rate never before seen in US history: about 1 for every 107 people in the adult population.' The United States currently imprisons five to nine times more people than western European nations, and significantly more than China and Russia. Roughly 3 percent of adults in the nation are now under correctional supervision: 2.2 million people in prisons and jails, and an additional 4.8 million on probation or parole. In modern history, only the forced labor camps of the former USSR under Stalin approached these levels of penal confinement.

"The fivefold increase in the number of people sitting in US jails and prisons over the last forty years has prompted little public outcry. In fact, many people scarcely notice this shift, because the growing numbers of prisoners are drawn disproportionately from poor and segregated Black communities. Black people make up 13 percent of the US population, but account for 37 percent of the prison population. Among Black young men, one in nine are in prison, compared with less than 2 percent of white young men. These racial differences are reinforced by class differences. It is poor Black young men who are being sent to prison at truly astounding rates: approximately 60 percent of those who did not finish high school will go to prison by their mid thirties. ... 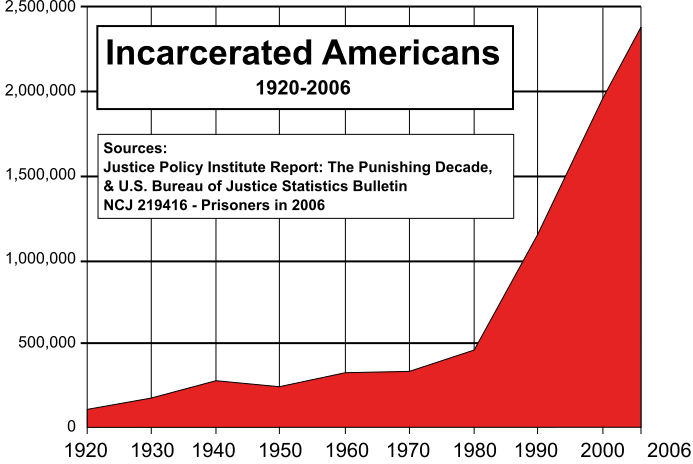 "The tough-on-crime era ushered in a profound change in how the United States manages ghettoized areas of its cities. For most of the twentieth century, the police ignored poor and segregated Black neighborhoods such as [Philadelphia's] 6th Street. Between the 1930s and the 1980s, an era which saw the Great Migration, restrictive racial housing covenants, the Civil Rights Movement, growing unemployment, the erosion of social services, an expanding drug trade, and the departure of much of the Black middle class from the poor and segregated areas of major cities, reports from firsthand observers paint the police in segregated Black neighborhoods as uninterested, absent, and corrupt.

"This began to change in the 1960s, when riots in major cities and a surge in violence and drug use spurred national concern about crime, particularly in urban areas. The number of police officers per capita increased dramatically in the second half of the twentieth century in cities nationwide. In Philadelphia between 1960 and 2000, the number of police officers increased by 69 percent, from 2.76 officers for every 1,000 citizens to 4.66 officers. The 1980s brought stronger drug laws and steeper sentences. In the 1990s, the tough-on-crime movement continued, with urban police departments across the nation adopting what became known as zero-tolerance policing, and then CompStat to track their progress.

"For many decades, the Philadelphia police had turned a fairly blind eye to the prostitution, drug dealing, and gambling that went on in poor Black communities. But in the late 1980s, they and members of other urban police forces began to refuse bribes and payoffs. In fact, corruption seems to have been largely eliminated as a general practice, at least in the sense of people working at the lower levels of the drug trade paying the police to leave them in peace. Also during this period, large numbers of people were arrested for using or possessing drugs, and sent to jails and prisons.

"The crackdown on the drug economy in poor Black neighborhoods came at the same time that welfare reform cut the assistance that poor families received and the length of time they could receive it. As welfare support evaporated, the War on Drugs arrested those seeking work in the drug trade on a grand scale.

"By 2000, the US prison population swelled to five times what it had been in the early 1970s. An overwhelming majority of men going to prison are poor, and a disproportionate number are Black. Today, 30 percent of Black men without college educations have been to prison by their midthirties. One in four Black children born in 1990 had an imprisoned father by the time he or she turned fourteen."