Today's selection -- from How Paris Became Paris by Joan DeJean. The first gigantic modern fortunes in Paris originated in the early 1600s not with the profits of commerce or industry but from high finance. These financiers arose through the profligacy of the king -- both in his wars (the army grew from 40,000 soldiers to 400,000) and his lifestyle. The sheer magnitude of the king's needs meant that the bankers of Paris displaced the famed bankers of Florence as the most important in Europe:

"In the word financier's inaugural appearance in English, in the 1652 The State of France, John Evelyn explained the workings of 'the king's revenue' and described 'the great Financiers who suck the very blood of the French people.'

"For the first time, Europeans could use words invented with the objective of classifying individuals according to their financial status and of singling out persons of new wealth. Such individuals had existed before but evidently not in sufficient numbers for a society to bestow official linguistic recognition on the phenomenon. And whereas previously, in European cities such as Venice and Amsterdam, most recent wealth had been accumulated through trade and the overseas trade in particular, the parvenus of seventeenth-century Paris had amassed their fortunes by dealing not in goods but solely in money.

"The emergence of the financier began in about 1600, when the French monarchy first encountered fiscal problems that have ever since plagued the modern state. 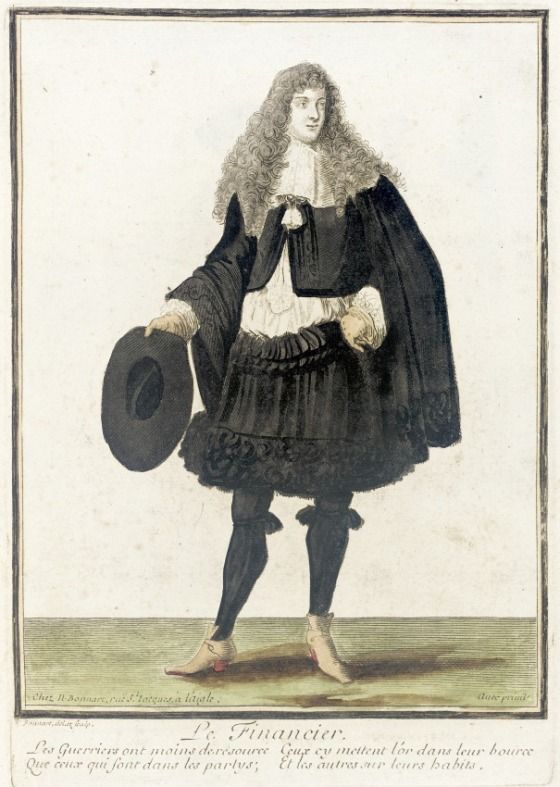 "Prior to the seventeenth century and early in that century, the French state lived mostly within its means: Henri IV even built up a small surplus (Adam Smith claimed he was one of the last rulers ever to do so). Then, during the first quarter of the century, spending began to outstrip revenue. As a result, the bankers, especially Italians, who had ruled over the finances of all European nations in the sixteenth century gradually ceased to play a preeminent role in France. The individuals then known as bankers dealt in foreign currency exchange and transferred funds throughout Europe. When, for example, a monarch had to pay soldiers stationed on foreign soil, he would call on a banker. But once French monarchs began to spend on a previously unheard-of scale, the need for another type of financial agent became evident. Lyon, formerly the nucleus for French finance because of its association with Italian bankers, thus lost its centrality. And by the 1630s Paris -- home to the financiers, the new financial agents on whom the crown increasingly depended -- had become the country's uncontested finance hub.

"Whereas in the sixteenth century the French monarchy's revenue had remained stable, in the range of eight to twenty million livres annually, during the first half of the seventeenth century this situation changed dramatically. Between 1590 and 1622, for example, revenue rose from about eighteen million livres to an estimated fifty million a year; by 1653, the total had grown to roughly 109 million, and it stayed well over a hundred million throughout Louis XIV's reign. This meant that the French monarchy had access to resources that vastly outstripped those of its major European rivals. A noted eighteenth-century economist estimated that during Louis XIV's reign France's revenue was four times greater than England's and nearly three times superior to that of the Dutch Republic.

"Relatively little of that was spent on keeping up appearances: between 1600 and 1656, court expenses rose only from three million livres to six million. However, whereas in 1600 court expenses accounted for thirty-one percent of the budget, in 1656 they represented only seven percent. During that half-century, the cost of war changed the face of French finance.

"France was at war with foreign enemies for sixty of the years between 1615 and 1715; it was torn by civil war for another five. In addition, Europeans had begun to wage war on a scale without precedent. The Thirty Years' War (1618- 48), the War of the Grand Alliance or of the League of Augsburg (1688-97), and the War of the Spanish Succession (1701-14) made armed conflict more costly than ever before. As a result, the French military machine never ceased growing. Whereas, for example, in the 1590s the French royal army was only forty thousand strong, less than a century later Louis XIV maintained a force of about four hundred thousand. Since France's main rivals, England and Holland, were maritime powers and the French had no navy to speak of, the country spent on a colossal scale to acquire one: in 1661 its entire 'fleet' consisted of eighteen near wrecks, but soon one hundred and twenty vessels sailed under French colors.

"Such transformations were possible because those in charge of the finances of France had begun to follow a logic later presented by Adam Smith as 'the necessity of contracting debt in times of war': 'An immediate and great expense ... will not wait for the gradual and slow returns of new taxes. In this exigency government can have no other resource but in borrowing.'

"The French government's bookkeeping divided expenses into 'ordinary' (court expenses) and 'extraordinary.' Due to the rising cost of war, between 1600 and 1656, extraordinary expenses ballooned-from just seven million livres to over a hundred million. When budget deficits began to surge, the state began to borrow as never before and thus had recourse to a type of financial agent who surfaced in the late sixteenth century: the financier.

"The original financiers signed traités, tax or loan contracts, with the crown; they also bought, sometimes at auctions organized by the crown, charges or offices that made them part of a private fiscal administration with close ties to the government, an administration that vastly expanded in size in the course of the seventeenth century. In return, they acquired the right to collect a new tax or import or export duty from which they guaranteed the government a fixed income -- and from which they were allowed to retain a sizeable share of the profits. Contract terms varied with supply and demand, but financiers always lent money at a cost far above the official rate of between five and eight percent. At moments when a war was going badly and the monarchy's need was therefore most pressing and money most scarce, a rate of twenty-five percent became standard -- hence the steady rise in 'extraordinary' expenses, a category that included the interest on loans.

"Tax contracts were especially useful to the crown because the deal was closed and money changed hands very quickly. Contracts for five hundred thousand livres were soon common; many involved far larger amounts. Naturally, few financial agents were able to deal for such stakes: it's likely that, at any moment in the century, fewer than a hundred individuals virtually controlled the financial fate of France. As the monarchy became ever more dependent on credit because its needs were growing, that number shrank. And thus it was that the first gigantic modern fortunes in Paris originated not with the profits of commerce or industry but from high finance."