Today's selection -- from What Hath God Wrought by Daniel Walker Howe. Isabella Baumfree, a black slave born in New York and owned by Dutch Americans, was freed under New York's "gradual emancipation," renamed herself Sojourner Truth and became a powerful voice for emancipation and women's rights:

"In 1815, Isabella, a slave girl of about seventeen living in Ulster County, New York, married Thomas, an older man who belonged, as she did, to the Dumont family. Over the next eleven years Isabella bore Thomas five children, in between stints of strenuous labor in the fields. New York had recognized the legality of marriages between slaves in 1809, meaning that now the couple and their children could not be sold apart from each other. Isabella herself had been sold away from her own parents at the age of nine for a hundred dollars, when their master died and his estate went up for auction. Isabella's first owner had been a Dutch American, and the child's first language was Dutch. Her next owner, an English-speaker, beat her for not comprehending his commands; her back bore the scars for the rest of her life. By 1810, she had been sold twice more (each owner realizing a profit on the transaction), ending up with the Dumonts.

"The state of New York had adopted a program of gradual emancipation, decreeing that slaves born after the Fourth of July 1799 should become free at age twenty-eight (for males) or twenty-five (for females). This would allow the owner who bore the cost of rearing the children reimbursement with several of their prime working years. Isabella, having been born before the cutoff date, would remain in slavery for the rest of her life. But in 1817, the New York legislature sped up the emancipation process and decreed that on July 4, 1827, all remaining slaves, whenever born, should become free. Masters would receive no financial compensation from the state but did have one more decade to exploit their chattels' unpaid labor. Shortly before the final emancipation took effect, Isabella's five-year-old son was sold away from her, south to Alabama. This constituted a violation of New York law; the newly free Isabella took the remarkable step of suing for and obtaining the boy's return, an act that set a pattern for her lifetime of resolute opposition to injustice. 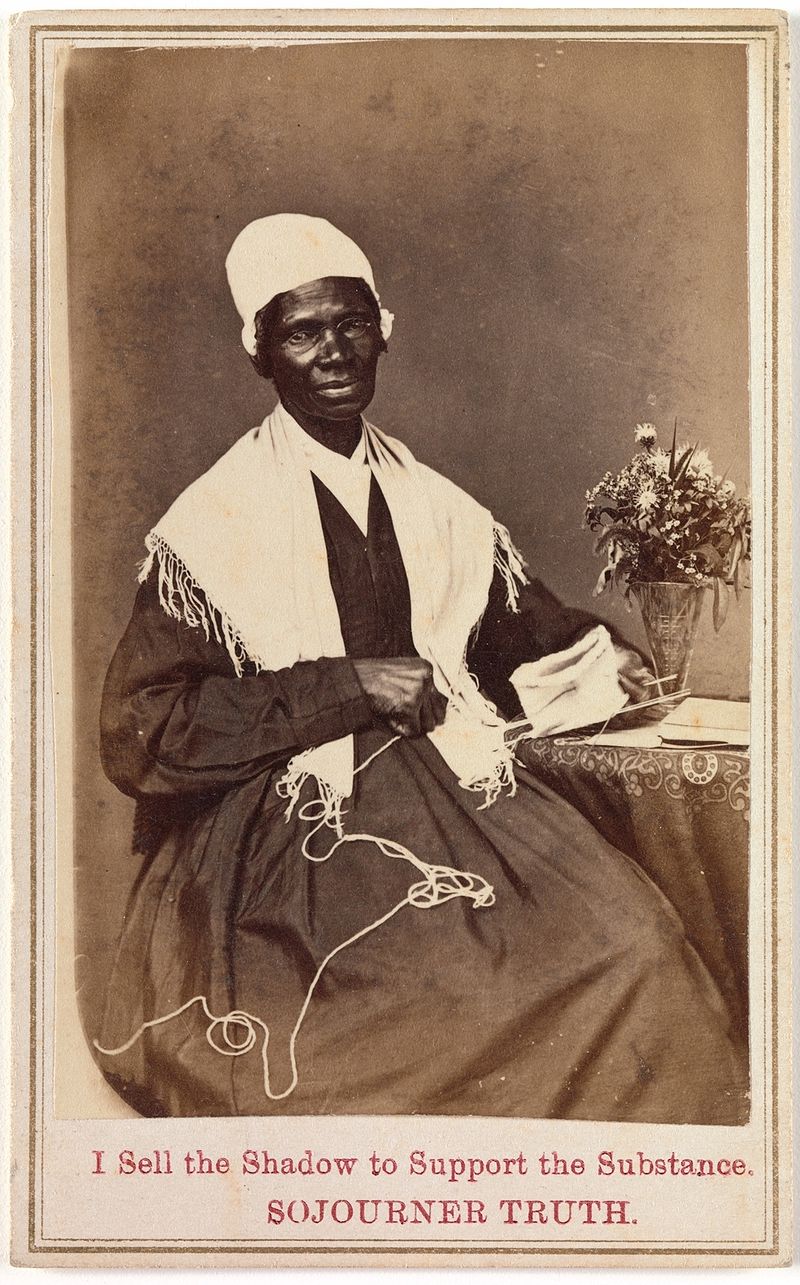 "Having developed an active prayer life in childhood under the guidance of her mother, Isabella grew into a fervent 'Holiness' Methodist. Once free, she left her husband (who may have been chosen for her by their owner) and became an itinerant preacher. She warned of the Second Coming of Christ and demanded the abolition of slavery throughout the nation. In 1843, she adopted the name Sojourner Truth, appropriate for a traveling herald of the Divine Word. Although illiterate, she spoke powerfully and dictated a financially successful autobiography. Five feet eleven inches tall, with dark skin and a muscular frame, Sojourner Truth commanded attention from an audience. Her resonant voice had a New York working-class accent that never lost traces of the Dutch. ...

"The combination of state and individual liberations had given the United States a substantial population of free African Americans -- approximately 200,000 by 1815. (Actually, more had been freed by individuals -- generous masters, courageous escapees, or thrifty self purchasers -- than by state laws.) The large majority of 'free Negroes' both North and South lived in cities, where they worked mostly in service occupations. Ironically, emancipated black workers sometimes found themselves excluded from skilled jobs that they had performed in slavery. In the ports, many went to sea: Twenty percent of the sailors in the U.S. merchant and whaling fleets were black. (Herman Melville would celebrate the racial diversity of the ship's crew in Moby-Dick.)

"The urban African American communities provided their enslaved neighbors both an example of life in freedom and a haven where they might escape and find shelter. Generally excluded from Independence Day celebration on July 4, the free black communities celebrated historical festivals of their own, observing the abolition of the slave trade, emancipation in New York, and (beginning in 1834) the abolition of slavery in the British West Indies. These communities provided the core audience for antislavery crusaders like Sojourner Truth and her co-workers of both races. Congregations like the African Methodist Episcopal Church, Zion, where Truth worshipped in New York City, became center of black autonomy. Self-consciously respectable community leaders, often clergymen or business-men, defended black rights to those outside and preached to those inside the virtues of literacy, hard work, and thrift -- both for their own sake and to rebut white racial slurs."