Today's selection -- from Soonish by Kelly and Zach Weinersmith. Scientists and engineers envision a day when material objects can be programmed to change according to our needs and desires -- when, for example, your dining room table can change into a couch at the touch of a button, and then change back again:

"Why, in the age of powerful computing and advanced synthetic materials, can we not make a lot of your stuff adapt to your desires? Why can't the materials in a building automatically respond to changes in the weather? Why can't you order four chairs to reshape themselves into a table? And for God's sake, why do we have to fold origami ourselves instead of just yelling at the paper until it turns into a crane? These things may not be as far off as they sound.

"MIT's Dr. Erik Demaine explains his enthusiasm about programmable mat­ter like this: 'To me the exciting thing about programmable matter is the idea of making gadgets that could serve many functions. I can imagine my bicycle turning into a chair when I wanted to sit down and not ride around. Then it becomes my laptop. Or my cell phone unfolds into a laptop ... We live in a computational world where software is reprogrammable ... Programmable matter represents doing the same thing for hardware. ... If you want to get the latest cell phone, you have to go out and buy some physical stuff. In the future we can imagine that the same stuff we have can rearrange itself into a new model. That's the dream.'

"Scientists, engineers, and artists from around the world are attempting to make some version of this possible. Some want to program matter in the sense of designing it to respond to conditions around it. Others want robots built into everything we do. At their most ambitious, these creators dream of globs of matter that can morph into just about any shape. As computers and electrome­chanical systems become ever smaller and more efficient, there may come a day when you can reach into a pool of shimmering liquid and pull out any device, from a wrench to a phone to a robot pet. ...

"Programmable matter is about endowing physical objects with information. This may be literal bits and bytes in an onboard computer or it may be 'knowl­edge' embedded in the structure of an object, via its shape and material makeup. This makes the field of programmable matter pretty diverse.

"[In a related development] MIT's Dr. Daniela Rus is interested in creating the smallest possible ... robot, and managed to build one about the size of a fingertip. It's a very simple ... robot, but simplicity has some virtues.

"When activated, the robot -- which looks like an innocent little square of gold foil with a magnet attached -- suddenly folds itself into a sort of electronic bug. By applying a magnetic field to the robot's onboard magnet, she can cause it to walk around, to swim, and to carry things. It's currently operated by re­mote, but she hopes to make an autonomous version.

"More recently, she has come up with an advanced version made from -- wait for it -- pig intestine. Okay, so, by MIT standards electrified pig intestine isn't all that weird, but this is a very special intestine strip.

"See, one of Dr. Rus's goals is to change medicine by creating tiny robots. The bot is small enough that it can be put into a pill-sized piece of ice and swallowed. The ice makes its way to your gut, where it finishes melting and unleashes its tiny robotic cargo.

"Dr. Rus's team created a demonstration gut into which a battery had gotten jammed. [Batteries being swallowed is] actually a thing that sometimes happens, especially with children and people who enjoy the pleasantly astringent taste of a Duracell DL2032.

"In any case, the ice dissolves in your intestines, leaving a little robot made of sausage casing and a tiny magnet. The robot folds into a form that is capable of 'swimming' around your intestines. It locks itself onto the delicious battery, then swims hard enough to dislodge it. From there, it makes its way out of your body. ... Remember, the robot is mostly sausage casing, so it dissolves away naturally.

"If these robots could be made even smaller, they might have more complex medical applications. Dr. Rus envisions a day when the ... bots can shape themselves into tools to perform procedures, or can bring medicines to particular locations in the body." 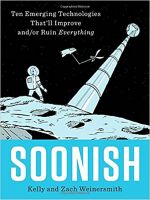