"Slavery in America was abolished in 1865, but even though African-Americans were free in name, they would not gain full equality under the law until the Fair Housing Act of 1968. For over 100 years, black Americans would be denied the right to vote, the right to a proper education, and the right to exist in certain places.

"Mamie Phipps Clark was born In 1917 in Arkansas. Racial segregation in the south meant that Mamie was not allowed in stores owned by white people and had to attend poorly funded black-only schools. Even so, Mamie had a happy childhood filled with love and learning.

"Mamie met her husband and future partner in psychology, Kenneth Clark, at Howard University. Mamie's master's thesis was 'The Development of Consciousness of Self in Negro Pre-School Children.' She used a picture test to prove that race is an integral part of a child's identity. Mamie realized she could use psychology to prove that segregation was wrong.

"Mamie got her PhD from Columbia University in 1943. Mamie and Kenneth eventually started their own practice, providing psychological help to families in New York's black community.

"Together the Clarks started the Doll Experiment. They traveled the country and compared the responses of children in segregated and integrated schools. They gave the children identical black and white dolls and asked, 'Which doll do you want to play with? Is this doll pretty? Is this doll nice?'

"It became clear that black children identified with the black doll, but the children in segregated schools said the black doll was ugly and bad and thought they themselves were also bad. Mamie and Kenneth had tangible proof that segregation damaged children and caused self-hate. This study was used in the Supreme Court case Brown v. Board of Education, which ended segregation in public schools.

"Although laws have changed, the effects of segregation are still felt in America." 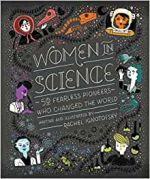