Today's selection -- from Listening for America by Rob Kapilow. Arlen and Harburg and Somewhere Over the Rainbow:

"Harold Arlen would collaborate with Yip Harburg on one of the most successful Holly­wood films of all time. A film that by its very nature would fit smoothly into the world of the Hays Code. The quintessential family film: MGM's The Wizard of Oz.

"By the time Arlen and Harburg became part of the Wizard of Oz team, they both had considerable experience with Hollywood, and none of that experi­ence had been particularly unusual or rewarding. Busby Berkeley's extraor­dinary 1933 trifecta of hits -- 42nd Street, Footlight Parade, and Golddiggers of 1933 -- had revived interest in the film musical, and Arlen was one of the many composers hired to fill the renewed demand. For his first picture, Let's Fall in Love (1933), Arlen wrote five songs: two were discarded, two remained in the film, and one was turned into background music. This was a much better result than most. When Rodgers and Hart's musical On Your Toes was turned into a film in 1939, all that survived from the original score were a few songs that had become underscoring.

"The Wizard of Oz, however, was one of the few film musicals of the 1930s in which the music, lyrics, dances, and book were fully integrated into the final film. Though ten screenwriters wrote multiple versions of the script and four directors at different times worked on portions of the film, all of the songs and lyrics were Arlen's and Harburg's. The two were involved with the production from the outset thanks to the influence of Arthur Freed. Though technically only an assistant to producer Mervyn Leroy, Freed made most of the musical decisions for the film, and it was Freed who hired Arlen and Harburg in May 1938 on a fourteen-week con­tract for $25,000. At the time, the script was still in its earliest stages, and the only hired actor was the sixteen-year-old Judy Garland. Film musicals were normally star-driven, and the composer's job was to tailor the songs to fit each star's particular personality and talents. But The Wizard of Oz offered Arlen and Harburg the rare opportunity to write music and shape the story before stars even entered the picture.

"They began with what they called 'the lemon-drop songs' -- the lighter material like 'Ding Dong! The Witch Is Dead' and 'We're Off to See the Wizard ' -- but though these songs came relatively quickly, they struggled with the ballad that would define Dorothy's character and become the film's signature song. 'I felt we needed something with a sweep, a melody with a broad, long line,' Arlen said. 'Time was getting short, I was getting anxious. My feeling was that picture songs need to be lush, and picture songs are hard to write.' Though stories about the inspiration for famous songs tend to be polished over years and years of retellings, according to Arlen, the song came to him out of the blue while he was driving with his wife to a movie at Grauman's Chinese Theater. He immediately stopped the car across from Schwab's drugstore and jotted down the melody. 'It was as if the Lord said, "Well, here it is, now stop worrying about it!"'

"But the song almost didn't make it past Harburg. When he first heard Arlen play it, Harburg thought the song was too old and symphonic for Dorothy's character. Ira Gershwin, however, liked it so much he helped con­vince Harburg, and the song became part of the score. Or so they thought. The studio executives, unfortunately, didn't want it. They thought it slowed down the opening of the picture, was too difficult to sing, and wouldn't sell sheet music or get played on the radio. After the first sneak preview, the studio head, Louis B. Mayer, cut the song for the next preview, at which point an enraged Arthur Freed essentially said, 'Either the song stays or I go.' 'Over the Rainbow' was inserted back into the film, the audience loved it, and the rest, as they say, is history. But what is it that makes this iconic song so great?

"In an interview for Aljean Harmetz's book The Making of the Wizard of Oz, Harburg described his creative process for the opening of the song:

The book had said Kansas was an arid place where not even flowers grew. The only colorful thing Dorothy saw, occasionally, would be the rainbow. I thought that the rainbow could be a bridge from one place to another. A rainbow gave us a visual reason for going to a new land and a reason for changing to color. 'Over the Rainbow Is Where I Want To Be' was my title, the title I gave Harold. A title has to ring a bell, has to blow a couple of Roman candles off. But he gave me a tune with those first two notes. I tried I'll go over the rainbow, Someday over the rainbow. I had difficulty coming to the idea of Somewhere. For a while I thought I would just leave those first two notes out. It was a long time before I came to Somewhere over the rainbow.

"Interestingly enough, the 'bridge from one place to another' that Harburg refers to is already set up beautifully before the song even begins. After Dorothy tries to tell her aunt and uncle about the unfortunate incident between the town spinster Miss Gulch and Dorothy's dog Toto, an annoyed Aunt Em tells Dorothy to 'find yourself a place where you won't get into any trouble.' Though Aunt Em is simply referring to an actual, physical place on the farm where Dorothy won't get into trouble, as Dorothy reflects on this, she turns the real into the metaphorical, saying to Toto, 'Some place where there isn't any trouble. Do you suppose there is such a place, Toto? There muse be. It's not a place you can get to by a boat, or a train. It's far, far away. Behind the moon, beyond the rain.' This little scene elegantly creates a 'bridge from one place to another' from the reality of Dorothy's Kansas farm to the world of her imagination, a world that comes to life with the first two notes of 'Over the Rainbow.'

"In a musical language utterly different from the through-composed, non­repetitive style of 'Stormy Weather,' 'Over the Rainbow' has only two melodic ideas in its famous opening. The first I will call 'leap,' and the sec­ond 'circle-and-yearn.' The full-octave leap on 'somewhere' is enormous for the opening of a popular song. It's a leap between two different parts of the voice -- and between two different worlds. The first note is low, almost in chest voice. It's Dorothy's troubled reality -- Kansas, aridity, no flowers, the black and white of the opening of the film. The second note is higher, lighter, and more ethereal. It's 'over the rainbow,' Oz, the place she wants to escape to. The other melodic idea occurs in the second measure, on 'over the rainbow.' It begins on a B, circles back to a B, and then yearns upward to a C. These gestures -- leap and circle and yearn -- are the two key musical ideas of the song." 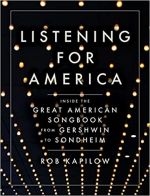