Today's selection -- from Jupiter by William Sheehan and Thomas Hockey. Jupiter is too far from the Sun to receive any significant heat; instead, it creates its own considerable heat by its own ongoing contraction:

"Jupiter might be considered a kind of half-fledged or would-be star, since it releases almost twice as much energy as it receives from the Sun. Though a quantitative result for this excess energy output is based on quite recent measures using infrared detectors, as far back as the nineteenth century a number of astronomers, including Richard Anthony Proctor and Percival Lowell, intuited that Jupiter and the other giant planets might be embryonic stars. At least in the case of Jupiter, they were not far wrong.

"Recall, again, the early history of the solar system, when Jupiter and the other planets were beginning to form out of the solar nebula. As matter began to stick together to form the first protoplanetary cores, and as some of these grew larger and attracted more matter, growing first to moon-like, then finally to planetary proportions, the collisions between them converted the energy of motion into the energy of heat. As Jupiter's rapid growth outpaced that of its rivals, its core grew hot. Much of this heat would be expected to remain bottled up -- Jupiter is in fact a rather good, if outsized, Thermos bottle, with an exposed surface area that is small compared to its mass.

"On the basis of these considerations, Jupiter would be expected to retain at least some of its primordial heat. In addition to the heat produced during the early phases of its career as a planet, however, Jupiter may still be generating heat by ongoing contrac­tion. Compressing a gas will heat it, as attested in the way a bicycle pump warms to the touch while being used. In order to retain its present energy output, Jupiter would have to shrink only a millimetre a year -- hardly a rate that would be susceptible to detection by even the most diligent telescopic observer!

"Another possible source of heat may be helium rain -- as it condenses and precipitates out of Jupiter's atmosphere, helium generates additional energy. (What a strange place Jupiter must be -- a place where it rains liquid helium!) The rotation of the 56,000-km-thick metallic hydrogen mantle produces powerful electric currents and generates an intense magnetic field. (Incidentally, the magnetic poles of Jupiter are 10° askew of the rotational poles; the reason is unknown.)

"The detection of faint radio noise by radio astronomers was identified with the core rotation. As noted earlier, this core rotation defines System 111. A rocky and metallic core, of perhaps five to ten Earth masses, is thought to be harboured in the very centre of the planet and surrounded by a 3,000-km shell of hot 'ices'. This rocky and metallic centre is the seed about which Jupiter formed. The temperature here is 30,000°c and the pressure perhaps 100 million times that of the Earth's atmosphere at sea level (on the order of 100 megabars). The pressure here is so vast that the core would be crushed into a volume smaller than that of the Earth, so that even diamond -- the least compressible substance known -- would be squeezed to a density greater than that of lead at Earth-ambient temperatures.

"Had Dante only known of Jupiter, he would have had a splendid place to situate his innermost circle of Hell!" 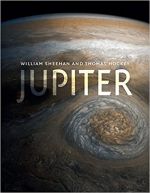