Today's encore selection -- from Basquiat: Boom for Real edited by Dieter Buchhart and Eleanor Nairne with Lotte Johnson. Renowned artist Jean-Michel Basquiat was born in New York in 1960. His father was born in Haiti, and his mother was of Puerto Rican descent. His parents separated when he was seven, and he and his siblings were raised by their father. He dropped out of high school in the 10th grade and, as a result, his father banished him from the household. He stayed with friends in Brooklyn and supported himself by selling small paintings, postcards and T-shirts. He quickly went from being homeless to selling paintings for tens of thousands of dollars. At age 27, he died of a heroin overdose. In 2017, an untitled painting of his sold for $110 million:

"In 1982, at the age of 21, Basquiat was invited to take part in Documenta 7 in Kassel, the youngest artist in the show's history at the time, where his works were exhibited alongside Joseph Beuys, Anselm Kiefer, Gerhard Richter, Cy Twombly and Andy Warhol, among others. Only six years later, Basquiat died on 12 August 1988.

"During his short life, Basquiat became one of the key figures of the downtown New York art scene and has since been ascribed a decisive role in the art of the second half of the 20th century. Almost 30 years after his death, his works continue to attract major attention, both on the art market and, more importantly, from art historians. His works are frequently compared to those of the great masters of classical modernism and the post-war era. Basquiat is considered in the same pantheon of artists as Edvard Munch, Warhol and Twombly. He has inspired generations of younger artists, including Rashid Johnson, Jose Parla and Oscar Murillo....

"In the art scene of downtown Manhattan in the late 1970s and early 1980s, working across different artistic media -- such as painting, performance, music or film -- was a widespread phenomenon, as was working collaboratively, especially among a younger generation of artists. An important role model in this regard was surely Andy Warhol, who since the 1960s had been furthering his repertoire. His practice extended from painting, graphics, drawing, photography, sculpture and film to fashion, TV, perform­ance, theatre, music and literature. Warhol overcame traditional barriers between disciplines and cultural scenes.

"Many other artists followed his example and began to work in multiple fields. Basquiat was active as a draughtsman, painter, performer, actor, poet, musician and DJ, while Keith Haring performed in public spaces, produced paintings, drawings and prints and worked with video and photography and also as a DJ. Haring created collaborative works with graffiti artist Little Angel Two (LA2) as well with artists, writers and performers such as Madonna, Grace Jones, William Burroughs, Timothy Leary, Bill T. Jone, Jenny Holzer, Yoko Ono and Warhol. Similarly, Julian Schnabel is today as known for his filmmaking as for his painting, not forgetting his interior design. As a result of this openness, moving between artistic disciplines virtually became a matter of course, anticipating the multidisciplinary work of many artists in the 1990s. ...

"At the beginning of his career, Basquiat created conceptual and politically charged collaborative graffiti with Al Diaz. On 29 April 1979, Basquiat 'performed' his first painting by spray-painting graffiti on a canvas mounted to the wall during the recording of The Guy's Big Party in Stan Peskett's 'Canal Zone'. As a musician, Basquiat performed as part of the band Gray with Michael Holman, Vincent Gallo and Nicholas Taylor (among others), and engaged with the early hip-hop movement with Fab 5 Freddy, Toxic and Rammellzee. He designed the cover for and produced the rap single 'Beat Bop', in collaboration with Rammellzee and K-Rob. For Rodeo, a short film by Salomon Emquies, he created neon drawings to be overlaid on the filmed performance of the single at the Rhythm Lounge in LA. His leading role in Downtown 81 further underscores the breadth of his artistic engagements." 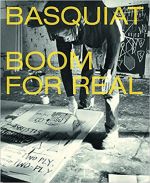